You're Invited to watch "Murder Party" 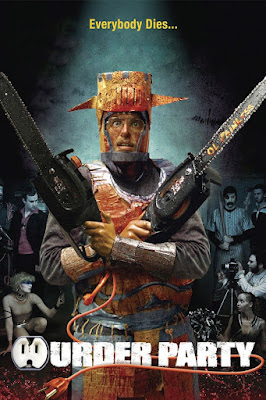 Writer/Director Jeremy Saulnier’s breakthrough film was the 2013 crime thriller “Blue Ruin”.  Loved critics and audience this was not however his first film.  That came in 2007 with hilarious gore-filled and underappreciated “Murder Party”.

“Murder Party” is a short 79 minute feature that is low budget but high on creativity and craftsmanship.  It takes place in New York City in the early to mid 90s and involves a lonely guy, (Chris played by Chris Sharp), looking for something to do on Halloween night.  He rents a stack of VHS horror movies and on the walk home finds a fancy Halloween party invitation on the ground.  He picks it up, looks it over, and takes it with him.  At home, he gets ready to watch his videos but his cat Sir Lancelot refuses to move from his recliner.  He then takes a second look at the party invitation and decides to go.  He makes a DIY costume out of cardboard and duct tape and becomes who else Sir Lancelot.  He bakes a loaf of pumpkin raisin bread, prints out directions to the party, and leaves.  Chris is a regular mild-mannered guy who is extremely relatable to the movie's target audience (like me).  A dry humor flows from his character.  Together with the ridiculous situations and characters, he faces it makes for a fun and entertaining little movie.

He eventually finds the place, a warehouse in the middle of nowhere, and cautiously enters.  He startles a group of people in costumes who have gathered.  Feeling nothing but stares and awkward vibes he tries to make small talk only to have them pounce on him and tie him to a chair.  The group of 2 girls and 3 guys are all struggling artists looking to secure grant money from a guy named Alex.  Unfortunately, before he arrives one of the girls is accidentally killed and stuffed in a chest freezer.  Chris learns he has become the unwitting victim in a contest to find the most creative and artful way to kill somebody, with the winner receiving the grant money.  Alex arrives with Zycho, his drug dealer, and Zycho’s dog.  As the group argues about what food they should order, Chris manages to free himself and briefly escapes, only to be recaptured and tied up again. 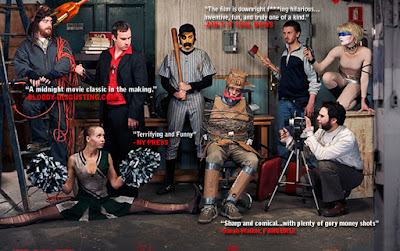 With the drugs free-flowing the group plays an extreme version of truth or dare.  Lather on when they find out that Alex is full of shit and has been lying about everything, things start to jump the rails.  The carnage begins and doesn’t let up, the group turns on each other and in the mayhem Chris is freed.  He is now on the run for his life and manages to run into a modern art opening.  The whole bizarre craziness of the modern art world is at the forefront of this movie and it never ceases to be hilarious.  With one exhibit, shall we say, being extremely modified by Chris and the guy chasing him.  This still fails to elicit a response from the melancholic art crowd.  After a stroke of luck, which has been hard to come by for Chris, he finally emerges victorious and heads home.  Still wearing his costume through the whole ordeal, but now caked in blood.  He rides the subway home and seems to fit right in with the crowd.  Arriving home he goes back to his recliner to see the cat still sitting there.  Once again asking Sir Lancelot to move and after being what he’s been through jumps down.  Chris plops down and flicks on the TV.  Roll Credits.  I love this movie.  With such a short run time and the number of characters involved Saulnier really makes the most out of every scene.  The performances from the cast are all strong and the gore effects are top-notch.  A lot of horror comedies will either try way too hard or go so far over the top it can be unwatchable.  “Murder Party” strikes a good balance between character, humor, and horror.  It is currently available to watch for free Amazon Prime.