Fear, Anxiety, and Paranoia "It Comes at Night" 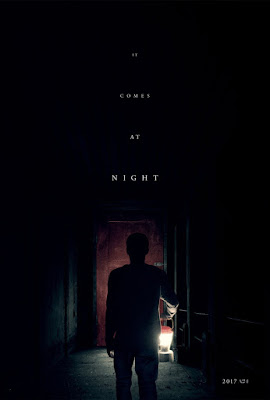 Rewatching “It Comes at Night” during the Covid-19 pandemic has brought on a new appreciation of the film.  Over the past decade or so apocalyptic survival films have seen a resurgence.  Whether it’s a virus, zombies, or aliens the fear and paranoia became all too real in 2020.  While not to the extent that the movies went to, it definitely feels like it’s not out of the realm of possibility.  The threat of a global virus is real and although zombies and aliens might seem out of the question, after living through 2020, would you really be surprised?

“It Comes at Night” was written and directed by Trey Edward Shults and takes place in a virus-ravaged world gone mad.  We open with an elderly man covered in sores and wheelbarrowed into the wood by people in gas masks.  The man is shot, burned, and buried.  He was a loved one and is now sorely missed.  This is the backwoods house of Paul (Joel Edgerton), his wife Sarah, their teenaged son Travis, and Stanley the dog.  When someone becomes infected tough decisions can’t be made from emotion but out of the need for survival.  The family has strict quarantine measures and they must be followed.  In these types of stories, it all comes down to trust.  People are by nature social creatures and as we found out with Covid, being stuck indoors with only your immediate family can start to wear on you.  When the thin walls of society start to crumble trusting people can be as deadly as the virus itself.

When Paul catches a late-night intruder (Will, Played by Christopher Abbott) at gunpoint, he says he is just looking for a safe place for his family.  Without hesitation, Paul knocks him out and ties him to a tree.  The next morning he interrogates him.  The burden of trust goes both ways as you can never be truly certain if the other person is telling the truth.  We then come to another big theme in these types of movies and that is faith.  Not in a religious sense but faith in humanity.  Does Paul risk the lives of him and his family to help this man?  Eventually, he does.  Will, his wife Kim, and their infant son Andrew move into the house.  We then start to focus on Travis who continues to have bad dreams.  For people growing up and living in isolation, especially teenagers, it takes its toll on your mental health.  His feelings of loneliness and isolation are helped somewhat by talking to Kim. 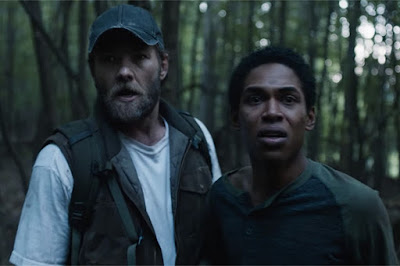 No matter how much the families get to know each other, there will always be this underlying sense of doubt and skepticism.  Things are going along smoothly until Stanley the dog runs after something in the woods.  He doesn’t return until sometime overnight, mortally wounded he walks into an open front door.  The candy apple red front door that we keep returning to separates the outside world from the inside.  Who opened the door? Was Stanley sick?  Is the virus now inside?  So many questions.  The title of the film “It comes at Night” does not refer to a monster or something supernatural but the fear, anxiety, and paranoia each of the characters face.  The razor-thin thread of trust that exists between the two families disintegrates in a hurry as Will’s infant son Andrews begins to show signs of sickness.  Things reach a boiling point when Will gathers his family and tries to leave.  Everything goes so bad, so quick leading us to one of the most soul-crushing endings you’re likely to find anywhere.  This film fits right into the “Art House” horror genre and some people might be put off by it and are expecting something else.  Another movie that I would recommend as part of a double feature would be the 1984 British film “Threads” about the after-effects of a nuclear holocaust.  As people found out with the Coronavirus civil society can lose control at the drop of a hat.  Just look at the people hoarding toilet paper and canned goods.