Gemma Arterton in "The Disappearance of Alice Creed" 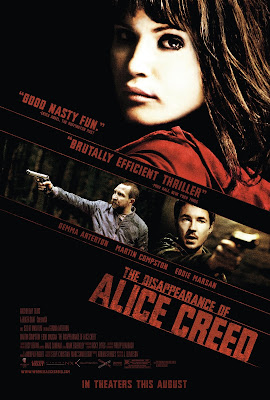 Treading on familiar territory and set up “The Disappearance of Alice Creed” rises above to deliver a tightly wound and thought out thriller.  This was the directorial debut of British filmmaker J. Blakeson.  Released in 2009, the film was well-received by audiences and critics.

The bulk of the film relies on a minimalist approach focusing on its three actors and one room.  It is essentially a twisty crime/thriller of the kidnapped rich guys daughter variety.  We open with a rapidly edited collection of shots of a room getting prepared for their victim.  They look to be semi-professionals who have done this before, but the fact that they use a cliched white panel van to abduct their victim leads you to believe they might be a little over their heads.  Our ex-cons are the calm and collected old tough guy Vic (played by Eddie Marson) and the young and wired Danny (played by Martin Compston).  They seem like quite the odd couple but do get the job done.  They succeed in their plan to abduct the title character Alice Creed, the daughter of a wealthy man they plan to extort.  Alice is played by the fearless and ferocious Gemma Arterton, who gives it her all in her performance.  The masked guys bring Alice back to the prepared room and go about their job of stripping her nude and shooting a ransom video.  This is all done in a very cold and emotionless manner.  Alice is not sexualized or lusted over by the men, this is a job and all that matters is the money.  They tie her to the bed and hold her at gunpoint waiting for a response for their demand of 2 million dollars.

Now that we have our basic set up its now time to throw in the first of several twists.  Vic goes on an errand leaving Danny to watch over Alice.  We come to find out that not only does Danny know our victim, but she’s an ex-girlfriend.  Danny removes his mask and Alice is obviously more than a little upset.  In a misguided show of compassion, Danny unties her which leads Alice to take the gun away.  Danny then proposes that they flip the script on Vic and team up to take his share of the ransom, she just has to play along.  Vic returns and it knocking on the door.  Alice agrees to play it out and gets tied up again.  Vic is suspicious of something but then we find out that Danny has been pretending to be Vic’s lover and this is how he has gained his trust.  We begin to see that Danny has masterminded this whole plan and needed Vic to be the muscle in the operation. 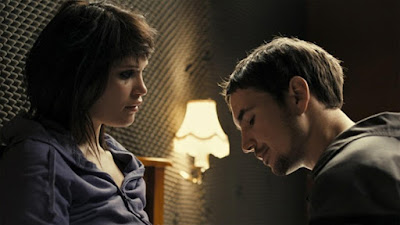 As we approach the third act the plot twists start flying at you right and left.  Vic has some quality time alone with Alice who spills the beans about Danny’s big plans, which then pits the two guys against each other, but they keep it together with the money still their main focus.  We then move outside the room as the ransom exchange is put in motion.  Alice is brought to an abandoned industrial building and chained to a pipe.  Vic then gets GPS coordinates to where the money has been buried.  When the guys get there Danny finds an empty hole, otherwise, know as his grave.  Although he escapes death as Vic is only able to shoot him in the arm.  Vic retrieves the money and goes to Alice who is still chained up, Danny is also there waiting for him.  In the ensuing shoot out, Vic is killed and Danny wounded, he leaves with the money and leaves Alice the keys to free herself.  After unlocking her cuffs and hopelessly checking on Vic she leaves to find Danny slumped over dead in a running car.  Alice ends up driving away with her father's money.  Roll credits.

“The Disappearance of Alice Creed” is a good watch that keeps the intensity up to a certain level the whole time.  It uses its bare-bones approach to maximum effectiveness and the performances of all three actors are top-notch.  It feels more elevated than your typical overblown genre exercise.  This film was also remade into the 2014 Dutch film “Reckless”.  Writer/Director J. Blakeson went on to direct the 2016 film “The 5th Wave” starring Chloe Grace Moretz, which turned out to be a bust both commercially and critically.  While Gemma Arterton has made a career both in big-budget films as well as small independent ones.  I would recommend the 2010 film “Tamara Drewe” if you're looking for more.