"The Little Girl Who Lives Down the Lane" Starring Jodie Foster 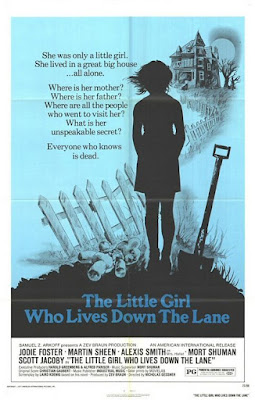 This is a strange little movie that came out of the 1970s that starred a 13-year-old Jodie Foster, released the same year as her break out role as Iris in “Taxi Driver”.  In this film, she co-stars with Martin Sheen, Alexis Smith, and Scott Jacoby, all of whom deliver great performances in this uneasy and disturbing story of a young girl who is diabolical and smart beyond her years.

Foster plays Rynn Jacobs who has just moved back to the area to live with her father, a famous poet, in a big house down the lane.  She had previously been living in London.  It is Halloween and also her 13th birthday when she is visited by the creepy and lecherous Frank Hallet.  His mother Cora has leased the house to the Jacobs' for a period of three years.  Frank has a reputation around town as a pedophile but who also has two kids of his own.  He makes a number of advances towards Rynn but she is quite mature for her age and brushes him off.  The clothing and soundtrack of the film are pure 70s with its bright colors and funky score.

The next day Rynn is visited by Cora who drives up in big green Bently.  She barges her way in and when Rynn refuses to help her in getting some glasses from the cellar she is annoyed and just beside herself, such a rude little girl!  Rynn does seem to be hiding something and we have yet to see her father as she gives numerous excuses why he can’t be bothered.  Rynn also doesn’t attend school, which Cora is going to look into.   She ends up leaving empty-handed and in an angry huff.  Rynn then makes a trip into town and runs into Officer Miglioriti who offers her a ride home.  He also is looking for her father and Rynn provides yet another excuse.  From now on it seems to be constantly raining.  The next day Cora makes a return visit and things get heated as she refuses to leave until she sees her father.  Rynn fires back with threatening to tell the cops about Franks's unwanted advances towards her.  Taking matters into her own hands Cora opens the cellar door, which under the kitchen floor, and is horrified by what she sees.  The door slips and smashes her on the head.  Cora is dead and Rynn covers it up. 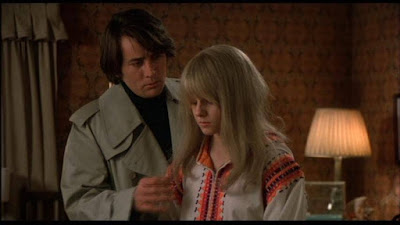 We are then introduced to Mario, the policeman’s nephew, an older teenager who rides by on his bike dressed as a magician with a long billowing cape.  She sees Rynn trying to move Cora’s Bently and stops to talk with her.  Mario walks with a cane and says he is a cripple.  They seem it hit if off and Mario returns after his magic show and moving Cora’s car.  Rynn has made them dinner and they are having a good time.  Mario is the perfect cure for Rynn’s loneliness and boredom.  Officer Miglioriti knocks at the door and comes in for a brief moment.  He mentions that Cora is missing and Frank might come snooping around asking questions.  Soon after Miglioriti leaves, Frank does show up and this time he wants answers.  It a shocking and controversial scene Franks tortures and kills Rynn’s pet hamster then tosses it in the fireplace.  He terrorizes the kids but Mario and his sword cane have Frank eventually leaving.

Rynn then confides in Mario as to what she’s been up too, they bury Cora’s body.  Rynn then helps Mario take a bath (awkward).  Then it’s implied that they have sex in front of the fireplace.  The next morning Miglioriti is back and insists on talking to Rynn’s father, who miraculously appears and walks halfway down the stairs.  They briefly chat and he signs a book for him.  Miglioriti apologizes for not believing her and leaves.  We then find out it was actually Mario in disguise.  Then we come to the most WTF scene of the movie when in her bedroom Rynn strips naked and gets into bed with Mario.  Now it’s obvious that there is a body double used because Jodie was actually 13 during filming but the audacity by the director to put in a scene like this takes some pretty big balls.  This whole movie walks an uneasy line with sexuality in general.  Rynn is a sort of femme fatale, Lolita-esque type character who plays with the hearts and emotions of all of the characters.

To wrap things up Mario gets stuck in the hospital with pneumonia and Franks takes one last shot at Rynn.  He gropes her chest while grabbing a safe deposit box key that is on a chain around her neck.  He wants answers and finds evidence that Rynn has killed Cora and her own mother.  In a scene earlier foreshadowed with Mario, Rynn makes them some tea with once cup spiked with cyanide.  Frank thinks he knows what she is up to but winds up playing right into her hands and drinks the poison.  We end on a very long take on Rynn’s cold and blank expression as the credits roll.