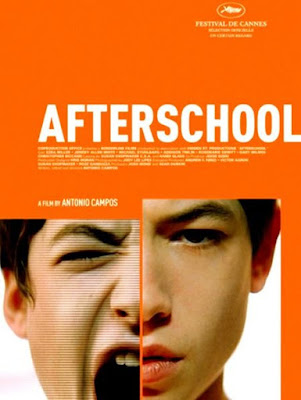 Writer/director Antonio Campos first came upon the scene with his 2008 film “Afterschool”.  This painfully authentic early portrayal of teens and how the new internet and cell phone culture affects the students at a prestigious prep school.  When tragedy strikes the student body seems desensitized and indifferent to the violence that has occurred.

When filming an empty hallway for his project Rob inadvertently films two girls who burst forth in obvious distress.  The twin girls Anne and Mary are quite popular and Rob calmly and quietly continues to film them overdosing on some tainted drugs until they stop moving.  He does nothing to help them as other students and teachers come to their aid, but it's too late.  Rob is interviewed by the police and then the school psychologist about what he saw.  He seems to be in a state of shock but not grief-stricken or sorry about what happened.  While in a therapy session he volunteers to make a memorial video of the girls.  Rob always seems to be in a melancholic state of confusion.  He has awkward sex with Amy in the woods, well more awkward than normal teenage sex I guess you could say.  Rob’s inability to express his emotions or to develop any kind of personality is frightening because he is in a way a model of thousands of teen boys his age.  What's even more bizarre is the memorial video he ends up creating.  When screened for the headmaster all he could say was “is this a joke?”  The film is a disjointed, jumbled mess of poorly edited clips and photos of the girls, completely lacking in empathy or any kind of human emotion.  You start to really think there is something seriously wrong with Rob but you don’t know exactly what.  The movie's final scenes are absolutely chilling but are they real or just make belief?

Watching “Afterschool” now more than 10 years after its release has lost a bit of its punch since it was such an “of the moment” comment on teens in the pre-social media smartphone era. Although the idea of how the internet can create socially awkward and desensitized teens is still an issue.  If you liked Ezra Miller in “Afterschool” he plays an even more messed up psychopathic teen in Lynne Ramsay’s 2011 film “We Need to Talk About Kevin” Which I reviewed a while back.