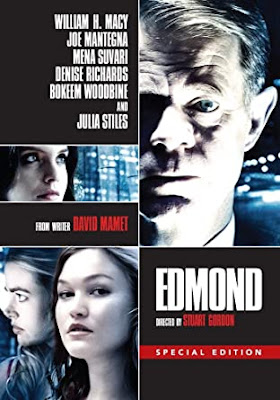 Director Stuart Gordon’s 2005 film “Edmond” was adapted from a play by David Mamet who also wrote the screenplay.  It’s a short little film, 82 minutes, about a middle-aged man going through a mid-life existential crisis in the same vein as Michael Douglas’s character in the movie “Falling Down”, except with Mamet’s keen use of dialogue.

Willam H. Macy has made a career out of playing the down on his luck everyman and the role of Edmond is the perfect fit for him.  He is a bland suit and tie businessman past his prime who on a whim visits a psychic and gets a tarot card reading.  The old lady tells him “You are not where you belong”.  This seems to flip a switch in his brain and he goes home to his wife and calmly and quietly tells her “I can’t live this life anymore” and leaves her.  Edmond then sets off on a journey through the streets of New York.  He talks to a man in a bar (Joe Mantegna) who spouts off this racist allegory and tells him to go to this strip club.  Edmond is kicked out of the club for being a repressed cheap bastard and his journey continues to a peepshow.  All the while he is looking for an authentic human connection with each of the sex workers he encounters.  His desperate loneliness is palpable.  He tries to bargain on price with each of them, even to the point of trying to use a credit card with a woman at a brothel.  Back on the streets he is approached by a pimp and they come to an agreement for one of his girls but Edmond is not surprisingly robbed.  What is surprising though is that he fights back and stabs the pimp all while berating him with racial slurs.  Feeling invigorated and alive he goes to a bar for a drink and strikes up a conversation with the young waitress Glenna (Julia Stiles).  He actually persuades her to go back to her place where they have sex.  Edmond then flies into a sort of manic rage eventually killing a terrified Glenna with his knife. 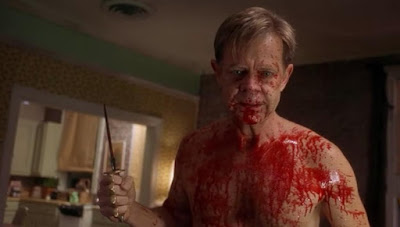 Edmond is consumed with a racist, misogynistic rage that has been long buried.  He has another such encounter with an older African-American lady on the subway but she is able to escape.  Further wondering the streets he is drawn to an all-black church and seems entranced until he is approached by a policeman and the women he harassed on the train.  He tries to talk his way out of it using his white privilege but is arrested and taken to the station for questioning.  Upon interrogation, he is blindsided when they ask him about the murder of Glenna.  He confesses with the twisted rationale of a mad man.  The third act has Edmond in prison with a cellmate who quickly makes him his bitch.  He makes a full stereotypical prison transformation as he shaves his head and gets a teardrop tat. The film ends with him and his cellmate having a long existential talk about hell and the afterlife.

Writer David Mamet is known for his talent for writing strong dialogue that my review here can’t accurately express.  It’s very raw and biting and not for everyone.  “Edmond” is a character study of a vile man who could be your next-door neighbor.  Since he is such a bland everyman he could literally represent a vast number of people who are also hiding a deepening rage against society as a whole and when the wolf decides to shed its sheep’s clothing this can be utterly terrifying.