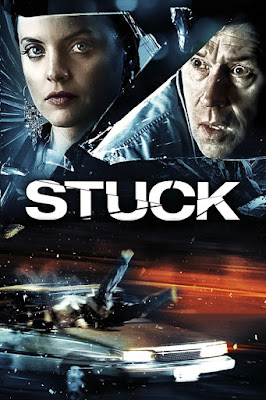 *Spoilers Ahead*
Director Stuart Gordon passed away in March of this year.  He left his mark by being one of the great contributors to the 80s horror scene.  The iconic Dr. Herbert West, played by Jeffrey Combs, in “Re-Animator” put Gordon on the map.  His next feature “From Beyond” which also starred Combs also drew wide acclaim from fans and critics alike.  To round up his amazing trio of films was “Dolls” in 1987.  He made a number of poorly received films in the 90s but his last two in the mid-2000s “Edmond” and “Stuck” were a return to his earlier form.  Here we will take a look at his last feature the “based on a true story” film “Stuck”.

Famed Irish actor Stephen Rea adopts an American accent to play Thomas Bardo, a down on his luck schlub who is being evicted from his scummy apartment.  With nowhere to go, he is cast out onto the streets to fend for himself.  When trying to find a job at the state unemployment agency he runs into nothing but bureaucracy.  With an armload of clothes and nighttime upon him, he makes his way to a park bench to mull over his future.  Meanwhile, we meet Brandi Boski, played by Mena Suvari.  She works in a nursing home and is the favorite nurse of Mr. Binkley and has literally shit the bed again.  After work, Brandi and Tanya (a friend from work) go to a club and meet up with Brandi’s boyfriend Rashid.  They all take some ecstasy and party the night away.  Drunk and high Brandi decides to drive home, obviously, this is not going to go well for her.  While chatting on the phone with Rashid (another nasty no-no) she hits a homeless man pushing a shopping cart.  This is, of course, Thomas who was kicked out of the park by the police, then was gifted the cart by another fellow homeless man.  Thomas’ leg is broken and his body becomes lodged in the windshield, hence the title Stuck, but the title is sort of a double meaning as we’ll find out.  In a moment of panic and darkly comedic drama Brandi makes her way home with the man on her hood.  She even passes by a policeman who fails to notice her.  Then makes a feeble attempt to drop him off at a hospital but drives away. 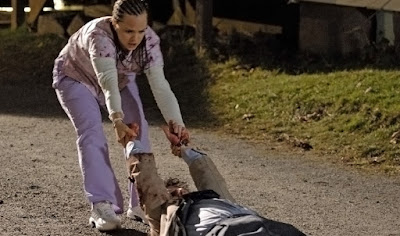 Amazingly she arrives home undetected and a moment of truth is upon her, what should she do next?   She doesn’t seem to be an inherently bad person, but her refusal to accept what is happening and take responsibility is her downfall.  Thomas then wakes up and pleads for help, obviously in agonizing pain, blood streaking down his face and a bone protruding ever so slightly from his broken leg.  Brandi is frozen in terror and disbelief and leaves him as Rashid arrives at her front door.  Brandi tells him about the accident, but not the fact that he is currently in the garage.  Rashid laughs it off and tells her to forget about it.  We then cut between a sex scene and Thomas writhing in the windshield.

The next day Brandi goes to work but is late, she tries to act like things are normal but is wracked with guilt.  Her guilt is more about what will happen to her if she is found out that what is happening to poor ole Thomas.  Before leaving for work she whacks him over the head with a 2x4 to stop him from screaming.  Later on, Thomas awakens still alive and kicking and gets the attention of a neighbor boy by screaming for help.  The boy runs home to tell his mother and when the father gets home he decides not to intervene since they are illegals and could be deported.  Thomas’s situation becomes so ridiculous that the film could be seen as a dark comedy.  He is eventually able to wedge himself free and splinter his leg.  When Rashid goes to finish him off he is ambushed and killed.  Thomas almost escapes but Brandi knocks him out and drags him back.  She then decides to douce everything is gasoline and set it ablaze.  Once again Thomas is awakened and gets the drop on Brandi.  He is able to start the car and pin her to the wall.  Brandi’s attempt to shot him backfires as the shot ignites the gas and burns her alive.  Thomas emerges from the flames a broken but free man.

“Stuck” is a low budget, well-acted B-movie that really brings the goods.  It has gore, sex, dark humor, and people making stupid decisions.  All based on the true story of Chante Jawan Mallard, a Texas woman who received 50 years in prison for the murder of a homeless man, Gregory Biggs.  Yes, the movie does take a bunch of artistic liberties, I mean Thomas surviving and getting his vengeance makes the movie.  Stuart Gordon’s last film while not earth shattering brought back the feeling of those mid-80s classics he is so famous for.