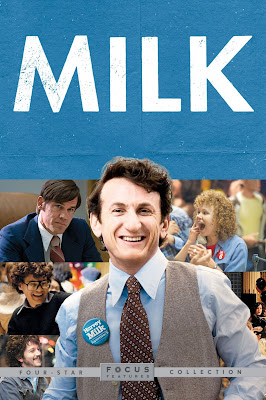 “My name is Harvey Milk and I am here to recruit you”.  This was the rallying cry of San Francisco Gay rights activist Harvey Milk.  His impassioned speeches to crowds and protesters demanded equal treatment for not only gays and lesbians but for all marginalized people.  Sadly, like many civil rights leaders before him, he was gunned down by an angry bigot with a gun.  Gus Van Sant’s 2008 film “Milk” was nominated for 8 Academy Awards, winning for Best Original Screenplay and Best Actor for Sean Penn and his spot-on portrayal of Harvey.

The film starts out with Harvey talking into a tape recorder with the purpose of leaving a record of his thoughts in case he is assassinated.  This acts as a sort of narration throughout the film as we keep coming back to it.  Right away we are then told of the death of Harvey and San Francisco Mayor Moscone at the hands of an unlikely assassin.  That was in 1978, we are then brought back to 1970 to show us how we got there.  Milk has just turned 40 and feels like he has not accomplished anything (join the club pal).  Living in New York he meets Scott Smith (James Franco) in the Subway and falls in love and things start to take off from there.  Together they move to San Francisco and open up a small camera shop called Castro Camera.  Harvey becomes an active social leader within the community and makes the shop a safe hangout spot for gays and lesbians.  Milk then takes it a step further in protesting the unfair treatment of the gay community by the police.  Eventually deciding to run for City Supervisor, but loses not once or twice but three times.  Although gaining more support and votes after each run. 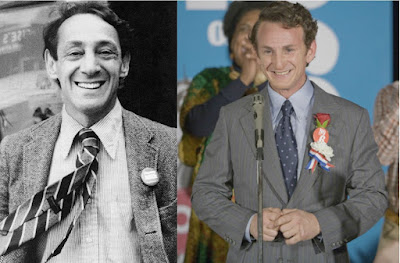 The outright fear, paranoia, and bigotry of gays ran from coast to coast as Harvey faced off with Anti-gay activist Anita Bryant and Senator John Briggs.  The film also chronicles Harvey’s relationship with Dan White another up and coming politician but one much more conservative than Harvey.  In 1977 things changed in how San Francisco was divided up and Harvey finally won a seat as City Supervisor.  The first openly gay man to be elected to any office in the whole country.  Dan White was also elected City Supervisor in a neighboring district and the two were at odds with each other.  Harvey didn’t play “the game” of politics and this angered White who eventually resigned his seat.  Ten months later white wanted his seat back but was denied by May Moscone.  White then coldly and callously brought a gun and extra ammunition to city hall and gun down both Moscone and Milk.  He was found, arrested, and booked for murder.  His trial was a complete failure of the justice system as he only served five years in prison.  Two years after is released he committed suicide.

The filmmakers of “Milk” gave credit to the 1984 Academy Award-winning Documentary “The Times of Harvey Milk” in which several scenes are re-enacted.  “Milk” is an engaging and emotional story of a man who fought like so many others before him demanding equal rights only to be killed for them.  This is simply an amazing film with Sean Penn giving a career-defining performance but still for some people the subject matter will be an issue which is a shame.  If you watch this film you will no doubt be touched by the life of Harvey Milk.