The 2007 Spanish film “Rec” created such a stir in the horror movie business that it only took about a year for the American remake “Quarantine” to hit theaters.  The films are an excellent and effective use of the found-footage horror sub-genre made popular by “The Blair Witch Project” in 1999.  Although with bigger budgets and more refined production.

“Quarantine” stars Jennifer Carpenter, who at the time also starred in the horror series “Dexter”  on Showtime.  She plays Angela a reporter who is spending the night shadowing a Los Angeles fire station.  Everything we see is from her cameraman’s point of view and like most found footage movies, you get a lot of shaky camera moments.  Angela gets to know some of the firefighters at the station but we primarily follow Jake, played by Jay Hernandez.  After a number of jokes and lightheartedness a call comes in and we jump on an engine and head to an old apartment building.  There is no fire but its a medical call for a sick old lady.  As we quietly enter the apartment of Ms. Espinoza we see her and there is definitely something wrong with her.  After a quick interaction, she jumps on one of the officers and takes a bite out of his neck.  From here on out the action, suspense and tension never let up.  The frenetic movement of the camera adds to the insane panic that is felt by all.  As people try to leave the building they find that they have been locked inside by the CDC and have been quarantined inside, hence the title of the movie.  Armed guards surround the place and cover the windows with plastic sheeting.  As we will see later they mean business. 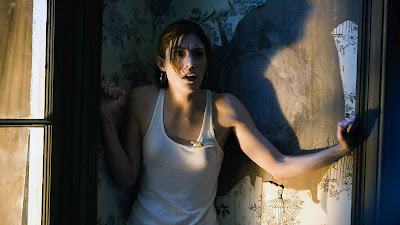 The apartment residents are pretty stereotypical and just serve the purpose of a higher body count but it works in a movie like this since the only quiet character moments were in the first ten minutes.  We have the mother and young daughter, the immigrant couple, the drunken asshole businessman, the young single girl, and a single guy who happens to be a veterinarian.  After witnessing some sick people they find out that the virus is some form of rabies, that spreads quickly and turns people into hyper-aggressive fresh eating maniacs, naturally.  At one point one of the infected is bludgeoned to death by the camera, very cool.  The resident all end up turning one by one.  The little girl, played by now horror veteran, Joey King has a great little scene as well.  As I mentioned before the action and suspense are non-stop and your at the edge of your chair for every minute of it.  Eventually, Angela and her cameraman are alone and make their way up to the attic to find several animal cages and information on bio-warfare.  Then in the green night-vision, we see a tall skeletal like being moving around.  The tension is so thick you can cut it with a knife, Angela then finds herself alone with the final scene of her being dragged off into the darkness.  “Quarantine” was one of my favorite horror films of the last decade and the best example of how you do a found footage film right.