"I Think Were Alone Now" with Peter Dinklage 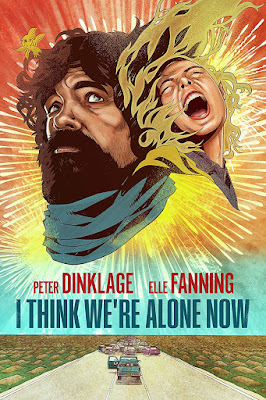 Reed Morano’s 2018 film “I Think Were Alone Now” is not a biopic about 80s pop singer Tiffany, but a story of a man making a life for himself after a world-altering event that has left him completely alone, or so he thinks.  There have been numerous movies that deal with the apocalypse or the last man alive scenario.  From drama, horror, sci-fi, and comedy, just about every genre has gone after the story in a different angle.

The magnificent Peter Dinklage plays Del, a man who has made the public library his new home.  He spends his days going from house to house in his suburban neighborhood cleaning.  He wraps up and removes bodies when needed and takes supplies such as food and batteries.  He also takes family photos out of their frames which he keeps in file folders back at the library.  Del is a quiet mannered man who goes about his business keeping a routine in a world that no longer exists.  What motivates a person to move forward when everything seems so unnecessary?  Humans are such social beings, living a life of solitude takes a certain type of person.  Del seems to have found a new purpose that drives him forward, but the loss of human connection is always with him.  Until he hears the blaring of a car alarm, he approaches with extreme caution, gun drawn, and finds a passed out teen girl, this is Grace (Elle Fanning).  In this new world, there is a risk in helping anyone, but Del cautiously helps her out anyway.  He locks her in a room until she awakens and then they form an understanding.

While Del still very much keeps to himself he does show Grace how to clean and clear houses.  Grace even finds a dog and brings him to back live in the library.  There are a number of questions that linger around.  Where did grace come from and why does she have a bandaged scar on the back of her neck?  We keep coming back to house number 13, is this Del’s old house? Also the biggest question as to what happened to all the people?  We get some answers but the seconds half of the film is considerably weaker than the first.  Del is such a fascinating character as Dinklage gives him such humanity and feeling.  Del is one of the few people who actually sees his situation as a sort of blessing in disguise.  He has not actively sought out any other survivors until Grace literally crashes into his life. 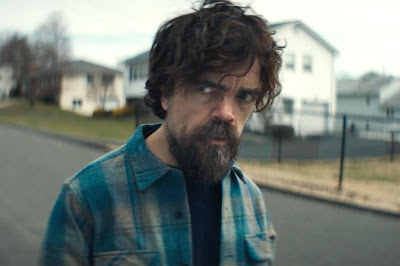 The second half of the film takes a more sci-fi route as one day Grace’s “parents” find her and want to bring her home.  It’s obvious that these are not her biological parents and it starts to explain the scar on her neck.  Grace is taken away and Del is powerless to stop them leaving him alone, again.  But this time he is prompted to take action and leaves his little neighborhood to find that there is actually a populated city going on like normal.  He finds Grace in a house hooked up to some medical equipment with an electrode cap that is playing around with her thoughts.  The Dad appears and we find out he is working on a machine that will eliminate grief, sadness, anger, and bad memories.  No deal Dr. Frankenstein, Del shoots him dead and like a freed prisoner the Mom runs out the front door.  Del rescues Grace and we get a tired and cliche ending of them driving into the horizon.  The way the movie was shot and the lens used to give everything this dreamy quality especially if you pay attention to the edges of the frame that are always slightly out of focus.  This is a decent movie that definitely could have been better, but if anything see it for Peter Dinklage’s performance.  If you looking for more Dinklage other than “Game of Thrones” of course, take a look at his break out role in “The Station Agent” which I have previously reviewed.