A Loud Disapproval of "A Quiet Place" 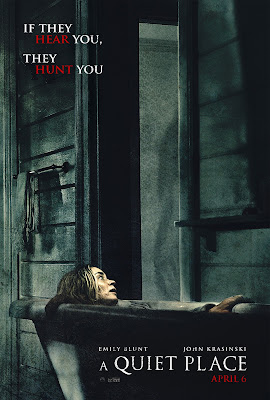 “A Quiet Place” is a horror film that takes things in a bit of a different direction than your average scare-fest.  Director and actor John Krasinski is primarily known for his comedic role on the TV show “The Office”.  He is playing against type in both respects as actor and director.  His journey into the horror/thriller genre is a welcome surprise as he brings a new voice and energy into an often tired and overworked genre.

Although names were not mentioned during the film (except for one), John plays a father and a husband named Lee Abbott.  His on-screen as well as off wife, Evelyn Abbott, is played by Emily Blount.  They have three children among them, two boys and a girl.  The oldest girl, Regan, is played by Millicent Simmonds who in real life is hearing impaired, this makes for an interesting pairing with the plot of the film which I will mention later on.  Her two brothers, Marcus and Beau, are played by Noah Jupe and Cade Woodward respectively.  The overall cast is kept to a minimum and reinforces the feeling of isolation the family feels.

The film starts out with a title card stating “Day 89” and we see the family scrounging around a desolate drug store in a post-apocalyptic landscape.  They tiptoe around with the utmost silence.  Beau the youngest boy eyes a toy space shuttle, but it’s quickly taken awake because of its potential to make noise, however upon leaving Regan lets him keep it, this a very bad thing.  We find the family walking along a path of ashes and crossing a bridge when the toy starts blaring, everyone turns around in horror as Beau is swept away by a big insect looking, creature.  We then flash forward about a year with another title card.  We see that Evelyn is pregnant which is foreshadowing a pretty obvious plot point to come.  Their lives are lived in silence as any noise will bring the creatures to their door.  They have efficiently adapted everything they do to reduce sounds.  They use sign language to communicate and even roll dice on a mat when playing games to eliminate any sound.  Only when Lee brings Marcus to a fast-moving stream or waterfall are they able to talk in their normal voices.  To further eliminate noise when inside or out everyone is barefoot.  Their clothing is minimal and reflects that of your average middle-class family, laundry is still being done as we see so things are not terribly desperate as of yet. They are still up on their cleanliness and appearance. 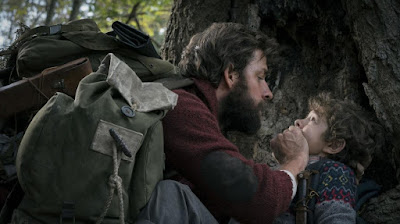 In a film with little to no verbal dialogue, it turns into a modern-day silent film.  This means the acting has to be good and contrary to your typical horror movie acting this film is definitely a step above.   The acting came through in the facial expressions of the actors.  When Evelyn was trapped in the house having to keep silent while also going into labor was pretty amazing.  Relaying all of the complex emotions she was going through was quite a feat.  The fact that Regan is deaf in real life and in the film looked to make her job all the more difficult.  She crafts a great character communicating all her emotions from angry and annoyed to anxious and terrified.  Her dad tirelessly works on new hearing aids for her without having much success, but his latest configuration is in the end a key to repelling the creatures.  Also contrary to most horror films we really care about these characters and want them to survive.  They are not just generic bodies to be gruesomely murdered by the hero monsters.

The post-apocalyptic scenery is something that has been used to death in modern films and TV.  “The Walking Dead” for example has cornered the market on this.  The most effective use of this in my opinion was the 2009 film “The Road” starring Viggo Mortensen.   Although not a horror film in the traditional sense, the film (and the book it is based on) looks to transcend the genre and make it something more.  I think that is what “A Quiet Place” is aiming for and in a way does that.  The family has to adapt to their new way of life and we stay pretty much within their little area of the world the whole time.  They make use of their natural surroundings and anything they can find to make themselves invisible from the creatures. 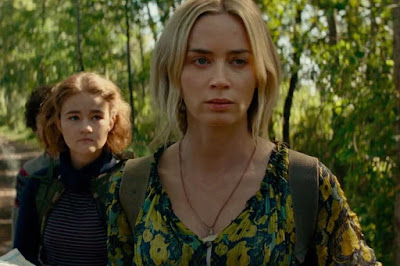 This film relies entirely on sound and the manipulation of it.  While the characters themselves are silent for a good majority of the film, the score by Marco Beltrami plays a huge part.  The score emphasizes the scary points and increases the levels of suspense.  Although when it is silent every little noise becomes magnified and of utmost importance.  When Evelyn or the kids and walking on the wood plank stairs or opening a door, you cringe hoping that the creatures won’t hear them.  While the filmmakers manipulate the audience with sound the same is true of the characters who use it to draw the creatures away.  When Evelyn is under attack, the boys light off a bunch of fireworks as a last resort to draw them away.  As is typical of a lot of horror films the lighting is minimally and there are a bunch of scenes that take place at night.  The family has rigged a lighting system around the perimeter of their living area to warn of danger.  If the lights are white all is good, if they are red then danger is amongst them.  Fires on top of their silo are also used to signal other encampments in the area.  The kids' use of flashlights also comes into play when they are in the cornfields.

While this film was better than your average horror film I don’t think it’s as great as the extensive praise it has received.  Some of my issues with the film might be a little picky, but it did interfere with the story in my mind.  Where exactly were they getting their electricity?  Normal human activities ended over a year ago and they seem to use a lot of power, if they had a generator I’m sure the excessive noise would attract trouble. Secondly, the fact that Evelyn is pregnant is purely to serve the plot, but seriously can’t you wait to have a baby until after you figure out how to kill these things.  After the baby is born they due have plans to minimize the crying fits but come on a baby will cry at the most inopportune times (and does).  Next on my list is that stupid nail on the steps, Evelyn steps on it originally, ouch! But then it seems to be a non-issue when everybody else goes down them.  At least try to mention it or point in out when your kids go running down them.  Finally, the creatures themselves, what are they and where did they come from? I’m sure this will be dealt with in the many sequels and prequels to come.