"The Crying Game" is an Early 90s Shocker by Neil Jordan 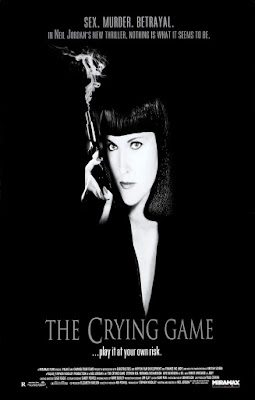 At the end of 1992 Irish writer/director, Neil Jordan debuted his audacious and critically acclaimed film “The Crying Game”.  It has achieved a sort of cult status because of its mind-blowing second-act twist.  Although watching it now it has lost a little something, but the overall themes of the film are as strong as ever.

This is Northern Ireland during “The Troubles” and Stephen Rea plays Fergus, a sensitive if not a reluctant volunteer of the IRA.  They have kidnapped a British Soldier, Jody (played by Forest Whitaker), in an effort to secure the release of some of their own political prisoners.  Fergus has been assigned to watch over him and they soon bond and develop a sort of friendship.  In their conversations, Jody mentions a girl back home named Dil (Jaye Davidson).  When shown a picture of her Fergus is taken aback by how beautiful she is.  Meanwhile, Jude (Miranda Richardson) and Maguire (Adrian Dunbar) who are pretty hardcore in their IRA allegiance, scold Fergus for being so soft-hearted.  When their hostage negotiations go nowhere Fergus volunteers to kill Jody.  He takes him into the woods at gunpoint but his conscious won’t let him pull the trigger.  Jody escapes momentarily until he hits the road and is run over by a military vehicle.  Fergus bolts in the opposite direction and escapes to London to search out Dil.

Fergus, who now goes by Jimmy, works various construction jobs while tracking down Dil who he finds working as a hairdresser.  He goes into the salon and gets a haircut to check her out.  Later on, he follows her to The Metro Bar and talks to her through the bartender.  Dil then meets her abusive jerk of a boyfriend.  Then after following them home watches them undress in silhouette in a second-story apartment.  Fergus is entranced and caught up with the enigma that is Dil.  He returns to the bar the next night to see her on stage singing “The Crying Game”.  That night Dil’s boyfriend is once again roughing her up but this time Jimmy kicks his ass and he is the one heading home with Dil.  Over the next few days, their relationship quickly builds and Jimmy finds himself being the only man in Dil’s life.  This is where things start to change, just as they are about to have sex Dil reveals very graphically that he is actually a man, WHAT!  Jimmy then proceeds to hit the bathroom and puke for about five minutes.  This scene has been parodied numerous times over the years, but when you look at it now Dil is quite obviously a man from the get-go.  However back in the early 90s maybe people had a harder time figuring this out.  Even Dil is like “come on I thought you knew”. 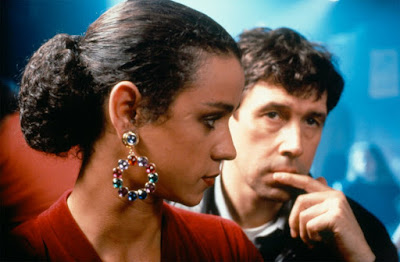 Days pass and when the ashes clear they eventually come back to each other to talk and form a new relationship.  But not so fast Jimmy or Fergus as his past starts to catch up with him.  Jude has survived the attack back home and she is stalking him and Dil.  He is in a heap of trouble for abandoning the IRA and now being forced to make hit on a British target or face the consequences.  The ending is emotional and bittersweet but also optimistic for both Fergus and Dil.

“The Crying Game” is one of the most uniquely original films of its time.  It won Neil Jordan the Academy Award for Best Screenplay, while also being nominated for 5 others.  Intertwining an IRA terrorist drama within a transgender love story is quite an amazing feat.  Both Jaye Davidson and Stephen Rea received Oscar nominations for their incredible roles.  Even more amazing is the fact that Davidson was not a professional actor and has had only one other role after this one.  At the time I am typing this the movie is available on Netflix and I consider it a must see!