"The Nightingale" by Jennifer Kent 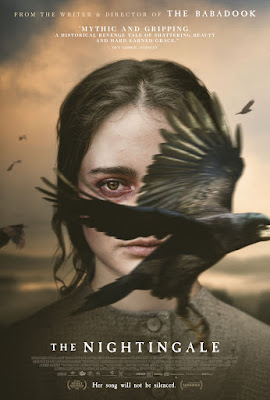 Australian Writer /Director Jennifer Kent drew both audience and critical acclaim for her 2014 debut film “The Babadook”, a frightening and disturbing psychological horror film about a woman and her young son.  For her second feature she looks to avoid the dreaded sophomore slump.  “The Nightingale” manages to dive deep into the real-life horror of a woman stuck in the middle of the Van Dieman’s Land (now Tasmania) genocide, also known as the Black War.  I must mention that this film contains extremely difficult imagery and is not for the faint of heart.  Kent shows just a sliver of what really happened to the women and indigenous people of Tasmania during this period.

Clare, played by Aisling Franciosi, is one of few female prisoners sent to the British penal colony of Van Dieman’s Land.  To secure her freedom she is forced to work as a barmaid and singer for the ruthless Lieutenant Hawkins (Sam Claflin).  She was allowed to get married and have a baby daughter.  As Hawkins continually denies Clare’s freedom her husband Aiden, a former prisoner himself, presses the issue with the Lieutenant and despite Claire’s warning gets them in serious trouble.  When Hawkins's long-awaited promotion to the North falls through he gathers a few of his men and visits Clare’s living quarters.  What takes place is quite possibly the most disturbing scenes ever put to film.  Aiden is told that Clare has been continually raped by Hawkins at the bar.  In a fury Aiden attacks the men only to be beaten and restrained.  Clare is then raped right in front of him and is then shot and killed.  Her baby’s unanswered cries are then silenced when Hawkins orders one of the men to shut it up.  Hawkins then takes it upon himself to travel north to see if she can secure the new post himself.

Bruised and broken Clare becomes hell bent on revenge, she gets a horse, a rifle, and heads off to find Hawkins and his men.  Although it is nearly impossible to navigate the rugged wilderness without an aboriginal guide, she finds Billy (Baykali Ganambarr).  The relationship that develops between them is rich and organic and gives the film its heart.  They find in each other a deeply tragic past and a common enemy that even if found can never bring peace. 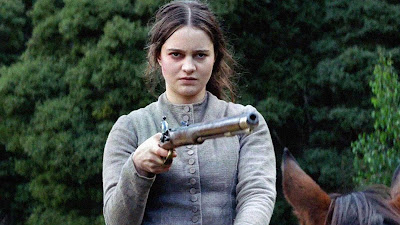 The violence in “The Nightingale” is intense and viscerally disturbing, one such moment is when Clare catches up with the man who killed her baby.  She shoots him in the leg and as he begs for his life she bludgeons him in the face a number of times.  Clare sprayed with blood feels no relief, no satisfaction in her actions.  Meanwhile, Hawkins and the guys find an aboriginal woman and each has their turn raping her, she is then shot leaving behind her young child.  Their aboriginal trail guide Uncle Charlie can do nothing but watch these horrific acts.

When Clare finally catches up with Hawkins and has her rifle pointed at him she freezes in a moment of utter fear.  He sees her and fires his rifle striking her in the shoulder.  Clare and Billy escape but are separated  The film's third act finds Clare and Billy reunited and entering the northern settlement.  Clare takes a different approach to take her revenge.  She finds Hawkins in the local bar and in front of him and the commanding officers sings to him.  While a little anti-climactic she tears at Hawkins's ego in front of his superiors.  After a little more abuse from Hawkins she leaves.  Billy on the other hand dresses in ceremonial white paint reminiscent of David Gulpilil’s character in the movie “Walkabout”.  In an act of revenge for his people who have been completely wiped out, he takes it upon himself to murder Hawkins and his one remaining sidekick.  He is shot in the gut in the process and Clare takes him to the ocean shore to watch the sunrise.  Does he die?  We will never know.  “The Nightingale” is a fascinating film that pulls no punches in its depictions of the real-life violence that happens to indigenous people during colonization.  It’s going to be interesting to see where Kent’s next film will take us.