"Leave No Trace" is An Emotional Powerhouse 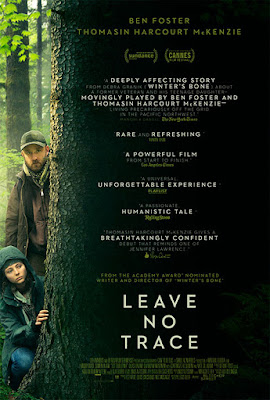 Director Debra Granik has only made 3 films and each one is an emotional and dramatic masterpiece.  Her previous film “Winter’s Bone” introduced the world to Jennifer Lawerence and now her latest “Leave No Trace” stars Thomasin Mckenzie, a young actress with a bright and promising future.  The film itself asks the viewer to contemplate a number of questions about what it is to live in a progressively modern society.  How should a person live and how society forces people to follow a certain prescribed path.  What is personal freedom anyway?  And how far does it extend?

Will is an Iraq war veteran, played by the always great Ben Foster, who lives in the Pacific Northwest with his teenage daughter Tom (short for Thomasin).  They live in the deeply lush greenery of the Portland park system.  Living a life off the grid in a sort of perpetual camping trip.  They get along great together even with no modern luxuries such as phones, televisions or internet.  They collect rainwater and scavenge for food and although Tom says she is constantly hungry they overall live a peaceful life.  They must remain hyper-vigilant about other people, especially cops and park rangers.  They train for such events.  As for money, they venture into the city where Will goes to the VA hospital to pick up his PTSD medications which he in turn sells.  They hit up the grocery store for a few things and its back home to the campsite.

The way that the filmmakers treat color makes you take notice.  The greenery of the forest is heavily saturated making it look like an unreal tropical paradise.  It’s a stark contrast against the city and civilization for that matter which feels like a concrete and asphalt prison.  Will cannot deal with society at large, but as a parent, he must care for his daughter.  Is keeping Tom segregated from modern society hurting her and her future?  This is the main question posed by this movie.  When Tom is spotted by a hiker in the woods, she doesn’t mention this to her dad.  Does she subconsciously want to be found to have more interaction with other people?   Shortly after this they are found by the police and brought in.  The woods are public lands and therefore living in them is illegal.  Tom is taken into protective custody by child services.  When asked if she is homeless, she says no.  Since she has not been enrolled in school she is given tests and asked several questions about her dad and their living arrangements.  She is proven to be a very smart and resourceful girl.  Will, on the other hand, is given a psych evaluation and is completely overwhelmed by the situation.  Eventually, he is reunited with Tom and is given a generous opportunity to live in a farmhouse.  This was given to them by a Christmas tree farmer who is sympathetic to veterans in his situation.  For Will, you can just see and feel the stress and anxiety that boils just below the surface.  He is not an outwardly angry or violent man by any means, but this is what he must do to keep his daughter as he fears losing her to the world.  She is the only thing in his life that he has some control over. 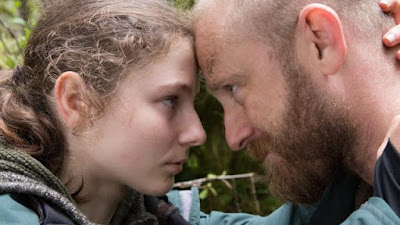 Tom is slowly introduced to a world outside of the forest and her dad.  She meets Isaiah a boy about her age who raises rabbits.  He takes her to a 4H meeting and she seems to be really enjoying herself.  This life doesn’t last long as Will can’t take it any longer.  In the middle of the night, he wakes Tom and they hit the road.  First hopping a train but she then persuades him to take a bus instead.  On a path to nowhere, they then hitch a ride with a trucker until entering the wilderness once more.  This time it's extremely cold and wet with survival now being the main concern.  Tom is starting to both worry and doubt her father at every turn.  The next morning they find an abandoned cabin to warm up and reset themselves.  After getting settled in Will says he is going out to look for food, but we gets this feeling that this is more of a goodbye.  Tom is worried about him and when he doesn’t come back the next morning she goes out to look for him.  She eventually finds him at the bottom of a creek with a severely damaged ankle, how he survived the night I do not know.  Tom is able to find help and they are brought to an encampment of RVs and trailers.  This backwoods settlement is the perfect fit for people looking to escape society and live a simpler life.  Tom loves it.  While Will rushes to recuperate, Tom bonds with the residents especially a lady who keeps bees.  When Will is finally able to walk without crutches he tells Tom “We have to go”.  She stands up to him by saying “You! Not Me!  This all comes to one of the most heartbreaking scenes I’ve seen in a long time.  In order to survive Will must continue on even it means leaving his daughter behind.  This need is bigger than himself and there is no answer to it.  Tom understands this “I know you’d stay if you could”  The film ends with Will once again venturing into the woods.  One thing that is not expressly mentioned is the whereabouts of Tom’s Mother, maybe I missed it somewhere but I loved this movie nevertheless.  The film feels so authentic and real with every actor adding to this complex story of not just a father and his daughter, but of deeper issues that affect us all.  This film is based on the novel “My Abandonment” by Peter Rock.  I have not read it, but it is definitely on my list.