"Don't Breathe" Will Leave You Breathless! 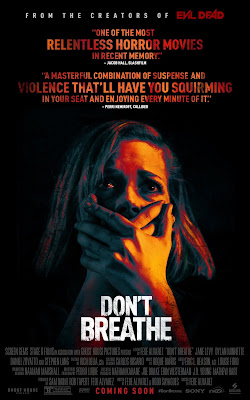 Writer/Director Fede Alvarez burst onto the horror scene with the 2013 remake of Sam Raimi’s “Evil Dead”.  In a refreshing twist this remake was incredible and one of the most intense and bat shit crazy horror films in a number of years.  Trying to avoid the sophomore slump, his follow up was the 2016 film of his own creation “Don’t Breathe”, which turned out to be the sleeper horror hit of the year.

Taking place in a vacant and rundown Detroit three small time burglars look to score big off a blind ex-veteran sitting on a mountain of cash he received after his daughter was tragically killed in a car accident.  Our thieves are Rocky (Jane Levy), a girl looking to escape her white trash abusive mother and take her younger sister to live in California.  Alex (Dylan Minnette), the strait arrow kid whose dad is a security officer.  He is able the gain access into people's homes so the trio can do their thing.  He also has a crazy teenage crush on Rocky.  Last, there is Money (Daniel Zovatto) a low rent wannabe gangster who sells off the goods they steal.  He and Rocky are mentioned as a couple, but vaguely.

Once the new job is proposed Alex is out, but in no time Rocky sweet talks him into it.  They do their research on the house and it looks to be their easiest job yet.  The Blind Man as he is called, we are never given his real name, looks to be an elderly man but as the trio comes to find out he’s still up to the job when defending his home.  At this point, the Blind Man has been built up as this great sympathetic character.  But we soon run into a disturbing twist that spins things around and really makes this movie into what it is. 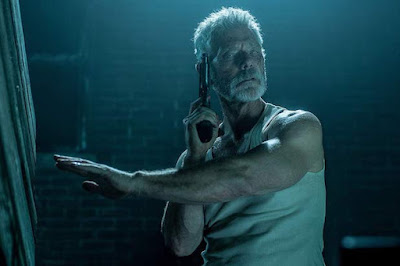 Once our bandits slip into the house the terror and suspense grips you until the end.  Although they try to sedate the Blind Man with a sort of homemade pop bottle fogger.  He is soon awoken, he is blind not deaf.  Although that being said, they use this to the story's advantage or disadvantage at certain points.  The Blind Man knows every inch of the house both upstairs and down in the large dungeonous basement.  Although this movie could have devolved into some kind of cheesy B-movie the storytelling and characters make this thing work.  It takes a certain level of talent to pull off a movie like this and Fede Alvarez definitely looks to be up to the task of not only making it work but to elevate the material into something special.  I don’t want to spoil this film but the third act reveals more about the Blind Man and his twisted plan to regain a new daughter.  This includes one of the most disturbingly cringe inducing scenes in recent memory.  I highly recommend checking this out while we’re all stuck inside in this crazy new world we live in.