"Event Horizon" is A Terrifying Trip to Hell and Back 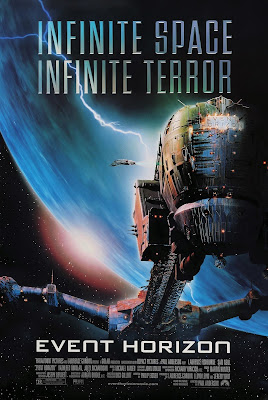 This sci-fi space horror film from the late 1990s has become a sort of cult hit.  It’s a strange crazy ride that is at times completely ridiculous and utterly horrifying.  After the success of the video game adaptation of “Mortal Kombat,” Director Paul W.S. Anderson creates his own vision of hell that lands somewhere between “The Shining”, “Alien” and “Hellraiser.” Although a box office disappointment it found life in the DVD market and has since enjoyed quite the following.

There is a timeline scroll during the opening and we find out that the year is 2047.  We meet Dr. Weir (Sam Neill) who is awoken by a nasty nightmare about his wife.  Space is a very cold and lonely place.  He is apart of the crew of the Lewis and Clark that is led by Captain Miller (Laurence Fishburne).  We meet the rest of the crew and Dr. Weir seems like the odd man out and as we find out he really is a truly disturbed and corrupt individual.  The crew is given orders to investigate a long lost ship that has suddenly reappeared, the ship is the Event Horizon.  This film exists in a time where CGI effects were still in its infancy.  Although the film generally looks good for its time, the practical effects are great.

When the crew docks with the Event Horizon they find it eerily empty and start to investigate.  They go through this trippy rotating tunnel that looks like a meat grinder.  It’s like one of those you would see at a carnival that messes with your equilibrium.  The heart of the ship is its core, three giant rotating steel rings.  When investigating the rings they suddenly align and a portal opens up, sucking in a curious crew member.  When he is recovered he says “It shows you things, the dark inside me”  There is talk about black holes, wormholes, and other mind-bending scenarios as to what happened to the ship during its 7 year absence.  It has literally been to hell and back.  There is this malevolent force that permeates all throughout the ship that causes the crew to have delusions and hallucinations.  It knows your fears.

In one of the most disturbing scenes, the crew is able to access some footage of what happened to the previous crew and we get this orgiastic feast of bizarre hellish violence.  Weir eventually goes completely off the deep end and is most likely controlled by the devil himself.  We end up in a battle between Weir and Miller.

The way the film starts out is nothing out of the ordinary from most space movies, but it grows increasingly tense and disturbing.  It’s a great midnight feature best watched in a non-sober state. It can be a little campy and stupid at times veering off into B-movie territory but that's part of its appeal.  Together with some authentic scares and fun characters, this is definitely a movie to come back to again and again. 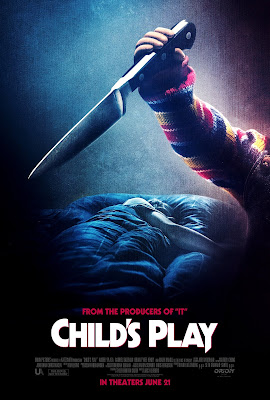 This rebooted Horror classic is obviously nothing but a shameless money grab but I’ve decided to give it a chance to see what it has to offer.  Reboots, in general, are quite the problematic trend these days.  For the studios, it’s easy money, but for the viewer, it’s nothing but cheap nostalgia, and poorly recycled characters and storylines.  Director Lars Klevberg gets under the hood of the Child’s Play world and outcomes this 90-minute piece of awkwardly familiar entertainment.

Oh, boy where to start.  In this story, Andy is not a 6-year-old boy like the original but is 13 and played by Gabriel Bateman.  His mother Karen is played by Aubrey Plaza who looks and acts like she is only a few years older than him.  She does mention that “she had a very productive sweet sixteen”.  Now we’ve come to the most important question of all, so what are they going to do with Chucky?   He is no longer called a Good Guy Doll but is just Buddi manufactured by the Kaslan Corporation.  To make the film more modern this Buddi doll is guided by a smartphone app and fits in with all of your other smart home gadgets made by Amazon, I mean Kaplan.  This brings up the issue of our smart appliances and artificial intelligence in general one day taking over the world.  The Buddi Doll that Andy receives was, as we see in an opening scene, sabotaged by a disgruntled assembly line worker in Vietnam.  This was the gateway for Chucky to become evil.  This is a damn shame because the original film does the ‘how does Chucky become evil’ bit a million times better.  No more Charles Lee Ray for this movie.  Then we come to the voicing of Chucky and get Luke Skywalker, Mark Hamill could not be more annoying in this role.  What was so classic and memorable about the original films was the menacing voice and crazy cackle of Brad Dourif.

Still with me, so Chucky is very protective of Andy and this leads to issues with his cat named Mickey Rooney.  This is a horror movie so you know the cat will be the first to taste Chucky’s knife.  Karen’s boyfriend is this huge douche named Shane who will obviously be on Chucky’s list.  The apartment building maintenance man is also is a big fat nasty sicko, so he has to go too.  The one good thing about the film is that violence is pretty intense, if not a little comical.  I did like that character of Detective Mike, played by Brian Tyree Henry, whose mother Doreen is one of Andy’s neighbors.  Doreen meets quite the unfortunate death at the hands of Chucky, this felt a little mean spirited, but this is a horror movie and she was black, so.

With the new Buddi 2 doll about to be released at Zed Mart, this is where we launch into our third act.  Chucky is now in full rage mode and starts to cause some bloody chaos in front of all of the parents and children at the release party.  Remembering that Chucky is just a doll, how he is able to knock out and tie up Karen is beyond me.  All of this craziness pits Andy against Chucky and it’s pretty obvious who is going to win.  Most, if not all, of these rebooted horror franchises, are heavily injected with is a sense of self-awareness and winks to the camera.  Doing this seems to cheapen an already inferior film.  Although I have to say that I am also part of the problem as I see all of these reboots and always regret it as the credits roll.  These remakes and reboots will never end so either learn to live with them or just ignore them if you have the will power.