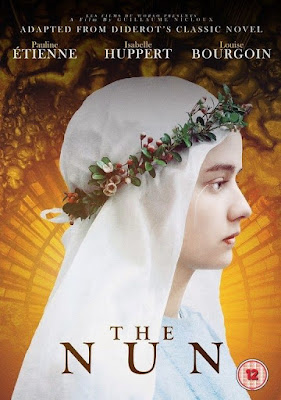 Although quite different from the previously reviewed horror movie of the same name, this film looks like it could possibly be a prequel for the horror movie misfire.  It takes place in France in the mid-1700s and involves a young girl who is thrown into circumstances beyond her control.  She must fight in order to survive the brutal Catholic church doctrines.  This film is actually a remake of the 1966 film of the same name starring Anna Karina.

Suzanne Simonin, played by Pauline Etienne, was born into a wealthy family with two older sisters and is quite the musician.  While not showing any interest in the available males in the area, she tells her mother that she loves Jesus the most.  She spends a year in a local convent and finds out this is not the life for her, but her family insists that she stay there.  When it comes time to take her vows, she speaks from her heart and denies them.  A humiliation to her family she returns home for a time only to have a bigger bombshell dropped.   Her mother reveals that she was an illegitimate child and with her sisters getting married they don’t have the money to support her.  Her mother coldly states “Your birth is my only sin”.  Suzanne’s real father is a rich man living in some far off castle, more on him and his son later.  With no other place to go, Suzanne is forced back into the same convent.  The sweet old Mother Superior is nice to her and she does end up taking her vows, but when the Mother dies under suspicious circumstances, a younger more sadistic Mother Christine is put in charge.  Christine puts more stricter policies in place and the defiant and rebellious Suzanne will not go along with the crowd.  She is ostracized by the other Nuns, bullied and humiliated at the hands of Christine.  She is able to send for a lawyer to see if she can have her vows annulled and get out, but the Vatican says no.  When she starts to write her story about what has been happening to her, she is caught and thrown in the hole.  A cold hellish dungeon where she barely survives.  Malnourished and covered in her own filth and shit she is finally rescued by a visiting Bishop. 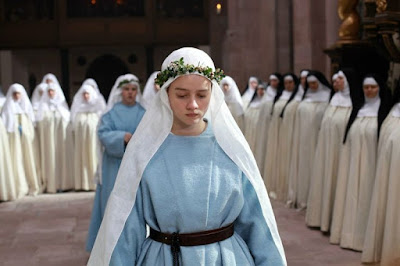 She is relocated to another convent that is led by Mother Saint-Eutrope, played by Isabelle Huppert.  Although appearing just fine at first, Suzanne begins to find that Saint-Eutrope is also a bit unhinged.  She always has a favorite Nun and when Suzanne arrives it disrupts the whole cloistered culture.  Saint-Eutrope takes an immediate liking to Suzanne and makes numerous desperate attempts to win over Suzanne’s affections.  She is harassed and embarrassed as before with Mother Christine but in a totally different context  Suzanne finally alerts the priest during confession, but it is a person from the outside world that is finally able to set her free.

The film starts out in a castle with a young man reading Suzanne’s manuscript that was sent to his father, which we find out later is also Suzanne’s Father.  The father is dying, probably from tuberculosis, and looks to want to help find his lost daughter.  Suzanne’s half brother sets off to find her and bring her home.