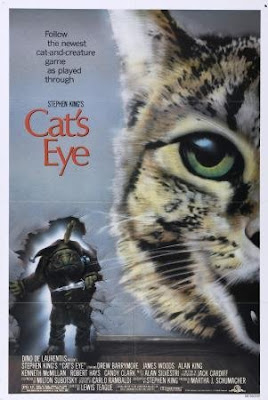 “Cat’s Eye” is an anthology film from Stephen King that is a little milder in tone than “Creepshow” which came out 3 years earlier.  This one also features a young Drew Barrymore who had previously starred in King’s “Firestarter” a year earlier.  If you were growing in the mid to late 80s there is a good chance you’ve seen this movie a number of times.  Although Stephen King has done a lot better, these 3 little stories do remind me of a time where I was a lot younger and craving for anything Stephen King.

“Cat’s Eye” is a series of three short stories that are all tied together by a cat that is on his way to save a little girl (Barrymore) from trouble.  The intro scenes are filled with nods to King's other films like Cujo and Christine as the Cat escapes capture on his way down the East Coast.  The first story is called “Quitter’s Inc.” and stars James Woods as Dick Morrison a chain smoker who is willing to go to any lengths in order to quit.  He visits this experimental clinic, which looks to be run by the mafia, and they guarantee that they can cure him of this nasty habit.  The program turns out to be no joke and he finds out just how far they are willing to go if he slips up.  Woods always seems to be such a funny and charismatic guy and there is a strong sense of humor in this story, especially at a party where everybody seems to be smoking and mocking him.  In this scene, we are also treated to a very memorable montage set to “I’ll be watching you” by The Police.  Dick is now forced to take a long hard look at himself and the way smoking is now literally hurting his family.  Is this filthy habit really worth it?  We get a surprise ending that is equally funny and a bit shocking.

The second story is the one that nobody ever remembers and for good reason.  “The Ledge” takes place in Atlantic City where a wealthy businessman finds out that his wife is cheating on him.  So he finds this guy, Johnny Norris a tennis pro, and forces him to walk around the ledge of a high rise apartment building all while taunting him and trying to make him fall.  When he finally makes it around, he is double-crossed and finds out that his lover’s head was loped off.  This enrages Johnny and he ends up killing the Old Man’s bodyguards and then forces him to walk the ledge, this does not go well for the Old Man and Johnny has his revenge. 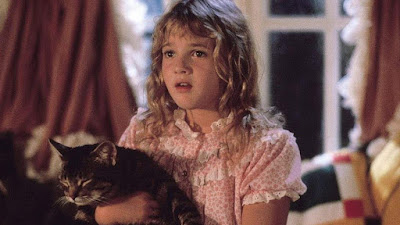 The third story is called “The General” and stars Barrymore as Amanda.  The cat, who is named the General, has now managed to make his way down the coast to Wilmington, North Carolina where he is to befriend Amanda and save her from an angry little troll that is hiding in her wall.  Amanda’s parents are not too keen on the idea of taking in a stray cat but The General is very determined and persistent. Amanda’s mom is also seen reading “Pet Semetary” (about a different kind of cat).  One night while sleeping the little troll emerges from a hole that opens up in Amanda's bedroom and it proceeds to kill Polly her pet bird.  In the morning The General is blamed for the death, but Amanda doesn’t believe it.  The next night the troll is back and looking to steal Amanda’s breath.  Just in the nick of time, The General forces his way in and pounces on the ugly bastard.  Thus begins the cat versus troll Battle Royale.  The General is eventually victorious leaving the parents to wonder what happen in her room.  Amanda is finally able to keep the cat and we live happily ever after.

“Cat’s Eye” is obviously not the greatest Stephen King adaptation, but it is entertaining.  If you're looking for more of a true horror film definitely check out the “Creepshow” films.  It does seem like they rushed this film into production in order to just put something out there with King’s name on it.  At the time he was that hottest thing going, kind of like he is now which all the remakes and new adaptations.  Thirty-five years later people still can’t get enough Stephen King.