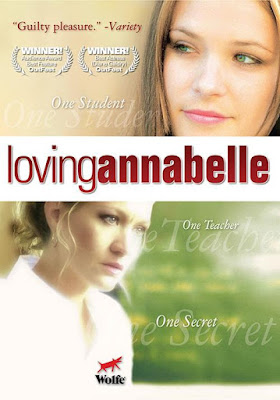 Although this could be the title of another sequel in the creepy horror doll franchise launched by James Wan.  This movie is, in fact, a lesbian drama about a teen girl at a Catholic school who has an affair with her teacher.  It all sounds very sleazy and naughty, but it is actually a pretty good film that doesn’t exploit its characters for cheap thrills.  That being this is still a film that would feel right at home at a midnight showing on Cinemax.

Annabelle (Erin Kelly) is quite the stereotypical angsty teenager with punk clothing, nose ring, and badass cigarette smoking.  She has been expelled from a couple schools and is now entering a Catholic private school.  She is obviously not religious and her Buddhist prayer beads ruffle the feathers of the schools' administration.  Her mother is a U.S. Senator and her father is absent, kind of like all the male characters in this film.  Annabelle and her poetry teacher Simone (Diane Gaidry) take notice of each other while in class.  After a few confrontations during class, they start to get to know each other a little deeper.  Annabelle is confident and secure in her sexuality while the older Simone is conflicted.  She had a tragic relationship with another woman in her past and is reluctant to enter into a new one.  She is currently in a relationship with a man but things don’t seem to be going too well.  As her relationship with Annabelle develops she is not portrayed as the cliched predatory teacher which usually happens with men.  Annabelle helps her deal with the events of her past and find a way back to her true self.  There is good chemistry and a strong sexual tension between the women that eventually boils over.  The next morning an old alarm clock fails to wake them up they are found getting dressed and their secret is revealed.  Soon after Simone is seen taken away by some detectives.  It’s a bittersweet and quick ending that leaves you wanting more.  You can understand what Simone did was technically wrong but can’t help but feel like an injustice is happening.

Although “Loving Annabelle” is a short 76 minutes it feels like it perfectly fits the material.  It doesn’t feel cheap or exploitive and shows a deep love and respect for its characters.  It’s not a perfect film but I feel like it tells a beautiful story in a way that’s entertaining and thoughtful.