"Annabelle: Creation" A sequel that blows away the Original! 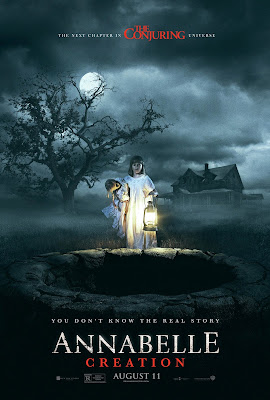 In 2004 director James Wan burst on to the horror scene with the iconic “Saw” franchise.  Then almost ten years later unleashed “The Conjuring” with its numerous sequels and spin-offs it has now become known as “The Conjuring Universe.”  The original film introduced us to the real-life paranormal investigators' Ed and Lorraine Warren whose case files were the inspiration for the films. We were also introduced to a creepy possessed doll named Annabelle.  This launched the first spin-off franchise with the 2014 film simply called “Annabelle”.  To be blunt it was a bitter disappointment, but three years later they decided to release a sequel anyway.  An origin story called “Annabelle: Creation”.  Maybe it was the low expectations, but this is the movie that should’ve kicked off the franchise.

It’s the early 1900s in a country farmhouse where a doll maker, his wife, and young daughter live a quiet and peaceful life.  Until one day a devastating tragedy, their daughter Bee (Samara Lee) is killed in an accident, leaving her parents Samuel (Anthony LaPaglia) and Ester (Miranda Otto) Mullins to grieve.  When things become unbearable they open a doorway that can never be closed.

12 Years Later,  the Mullins have been operating an orphanage called “St. Eustace School for Girls”,  A new batch of girls and their guardian Sister Charlotte arrive, they focus on Linda (Lulu Wilson) and Jan (Talitha Eliana Bateman).  Jan is recovering from Polio and walks with a crutch and leg brace, while Linda is friendly and inquisitive with her doll Sweet Sue.  Samuel goes over the ground rules for the house.  You must never bother Ester as she is always locked away in her bedroom.  You must also never go into Bee’s old bedroom that is always locked.  The orphanage has an electric stair lift for Jan, which you know will be used to some scary effect later on. 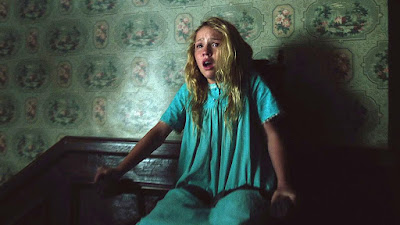 At night the creepy, spine-tingling spirit of Annabelle is strong as it calls to the girls to set her free.  While playing hide and seek, Bee’s room unlocks and Jan enters, she finds a key that unlocks the closet containing the Annabelle doll.  The walls are plastered with pages torn from the bible.  Annabelle is freed and takes hold of Jan who becomes confined to a wheelchair.  This leaves Linda to fight Annabelle to save her friend.  She drops the doll down the well, but it's no use as the spirit has attached itself to Jan.  She visits with Ester and we get the back story of how the Mullins made a deal with the devil to see their daughter once again.  When they allow the spirit to inhabit the Annabelle doll everything goes to hell.  We see that Esther was attacked and her face was disfigured.  She now wears one of those Phantom of the Opera Masks.  Linda and the Mullins fight to save Jan from the Annabelle demon and when everything seems to be all back to normal we again see the words 12 years Later pop up on the screen.  We see an older Jan in a scene that links this film to the beginning of the original “Annabelle” film.

Overall the filmmakers created this great atmosphere throughout the film with a dusty old gothic feeling inside and out the orphanage.  There are some scares and scenes we’ve seen before but it is done well and with great characters and superb acting. Lulu Wilson has been in horror movies before and is quite amazing as Linda.  Together with Talitha Eliana Bateman, they create an amazing team.