"Annabelle Comes Home" Another Great Addition to the Conjuring Universe! 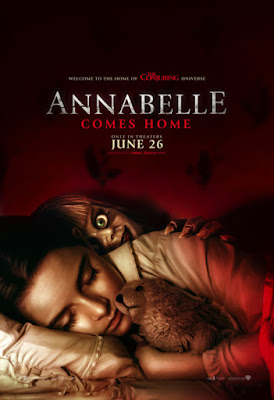 After the success of  “Annabelle: Creation” in 2017 another sequel was obviously not far behind with “Annabelle Comes Home” premiering in the summer of 2019.  This film could have also been called “Conjuring 3” since the story revolves around Ed and Lorraine Warren and their daughter Judy.  Although the actual “Conjuring 3” movie is scheduled for release in the fall of 2020.  “Annabelle Comes Home” was written and directed by Gary Dauberman, who wrote the first two Annabelle films.

We get a great opening scene of Ed and Lorraine taking possession of the Annabelle doll then trying to get it back home, but Annabelle doesn’t make it easy for them.  They are eventually able to lock the doll away in a glass case with chapel glass to “keep the evil contained”.  One year later we meet their daughter Judy, played by Mckenna Grace, an actor who portrays a person much older and wiser than the young girl that is on screen.  Judy is not very popular at school, she is made fun of and ostracized because of who her parents are and what they do.  She is only friends with her babysitter, Mary Ellen (Madison Iseman), who is going to be looking after her when Ed and Lorraine leave for the night.  Also in the mix is Daniela (Katie Sarife), Mary Ellen’s friend, a curious and interesting girl who is pretty much the linchpin for the entire plot of the film.  So it’s the three girls against an enormous evil and don’t forget about Bob, because Bob’s got balls.

The beating heart of the Conjuring films, and this one, is the Warren’s artifact room.  A room that houses numerous haunted and possessed items.  It contains the Annabelle Doll as well as a long list of possible spin-off franchises.  Just like the Conjuring films we are introduced to a few new nightmare inducing bad guys, the Ferryman, the Bloody Bride, and the Werewolf.  When Daniela is left alone in the house she goes straight for the artifact room, but it’s got numerous locks.  She finds the keys pretty easily and in no time is checking out all of the items in the cursed room.  Annabelle does her thing and Daniela opens the case to re-adjusts the doll as is had fallen over.  Just then the smoke alarm goes off and Judy’s birthday cake is burning and the case is left open. 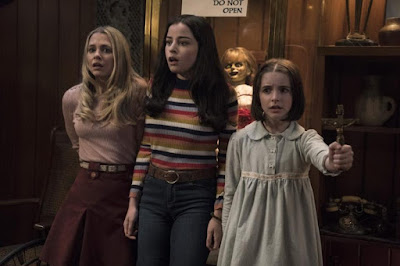 This movie has a number of comedic moments that really seem to hit.  The lone male character other than Ed Warren is Bob, who works at the grocery store and is Mary Ellen’s crush.  Bob is awkward but sweet, and as I mentioned before he’s got balls.  The girls and Bob are in for quite a night of paranormal pandemonium (that was a mouthful).  Judy has inherited some of the gifts of her mother and is much more sensitive to the paranormal, but is also better prepared to handle it.  We take this journey with numerous ghosts and spirits, mostly terrifying, but as Judy mentions “not all ghosts are bad”.  The film is well made, but possibly too jam-packed with possible spin-off characters.

The cast is the real strong point of the film.  The Warrens, played by  Vera Farmiga and Patrick Wilson, really ground these films in an everyday reality where ghosts and spirits live among us.  As far as the Annabelle character, I think she has run her course with this trilogy of films. Hopefully, the studio will be content to leave the franchise alone.  Can’t wait to see what they do in “Conjuring 3”.