"Cry Wolf" Will Make you a Believer 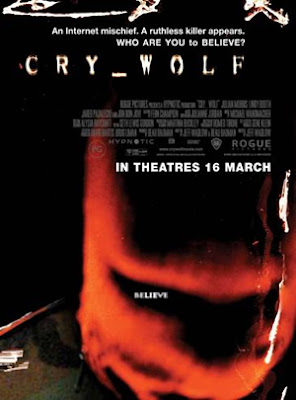 The late 1990s and early 2000s were all about the teen horror movie, a sub-genre that was reinvigorated by Wes Craven’s 1996 film “Scream”.  Although “Cry Wolf” doesn’t rewrite the rules of the modern scary movie, it is a low budget film with a clever script and Jon Bon Jovi as a teacher? Say what!

The story takes place at West Lake Prep school, a repository of rich and over-privileged teens who keep themselves entertained by playing elaborated games of lying and deception.  We enter the film through the eyes of new student Owen (Julien Morris), who is way too innocent looking and also happens to be British.  He is introduced into the world of West Lake by the resident popular girl, Dodger (Lindy Booth). Then Owen meets the popular kids and is invited to sneak out after dark to join them in playing the lying game.  He leaves an impression and obviously develops a crush on Dodger.  While in the library together they instigate a prank in creating a campus serial killer.  The technology used in the film is period-accurate so by today’s standards is quite outdated.  The students use AOL Instant Messenger to pass around rumors about “The Wolf” and his recent victim, a girl who was actually murdered in the woods by the school.  The Wolf becomes a viral sensation before the term viral was even a thing.  Smartphones were still a few years away and social media was still in its infancy. 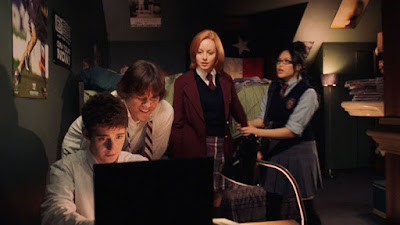 Things then start to get real when Owen and a few other students are attacked by a person dressed up like the Wolf (Camo jacket, orange ski mask, large hunting knife).  The search is on to find out who this person is and everyone on campus is a suspect.  As I mentioned in the opening, Jon Bon Jovi plays Mr. Walker a teacher who is found out to be having an affair with Dodger.  She has broken it off, but Owen isn’t so sure.  At one point Owen loses his book bag while running from the killer and when he gets it back the killers hunting knife if found inside implicating him.  The students in the lying game circle start to disappear and the remaining students are freaked out and want the game to be finished.  The third act involves betrayals, double-crosses, and a surprising murder or was that the plan all along?  Without giving away too many spoilers the puppet master is revealed and we find out all the intricate details.  This movie takes full advantage of the shocking twist ending that was popularized by “The Sixth Sense”.  “Cry Wolf” is an entertaining horror film that while not earth-shattering rises above your average scary movie.