"The Howling" is an 80s Horror Classic! 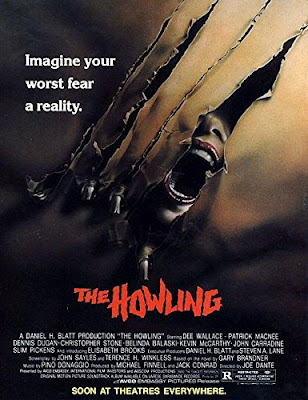 1981 was a full moon when it came to werewolf movies as two classics of the genre were released.  In the Springtime we saw Joe Dante’s “The Howling” and in late summer John Landis’s “An American Werewolf in London” came out.  Both films offer similar groundbreaking visual effects but this review will focus on “The Howling”. 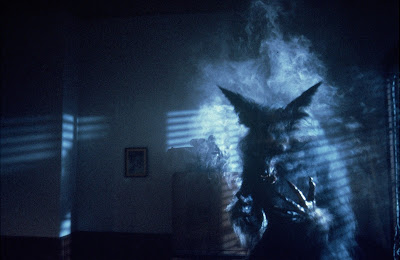 Back in the city the police along with two other reporters Chris and Terry, who are friends of Karen, investigate Eddie’s apartment and find all kinds of weird pictures, drawings, and objects.  Drawings of wolf-like people that foreshadows what's to come up at The Colony.  They then come to find that Eddie’s body is missing from the morgue.  Chris and Terry go to an occult bookstore and get a history lesson on werewolves, then they decide to go to The Colony and try to save Karen and Bill.

The mythology of the werewolf is of the beast that resides in all of us.  It’s about deeply repressed feelings and emotions that try to claw their way out of us.  Another great example is the movie “Ginger Snaps” about two teen sisters coming to grips with their burgeoning sexuality.

Bill is the first one to be bitten and changed as he is seduced by the sexy vixen Marsha.  Once Chris and Terry arrive all hell is breaking loose.  Eddie is back for some unfinished business with Karen and we see him fully transform into a wolf.  For 1981 these practical special effects are amazing and still look great every by today’s standards.  It gives the film a look that you just can’t get with CGI.  We also see Dr. Wagner as the Alpha wolf attacking Terry.  The fight for survival is on.  Just when Karen gets to a car and drives away she comes to a barricade put up by the kind old Sheriff Sam, but he too is a wolf.  Karen then is attacked from behind and bitten by none other than Bill.  When they get back home things seem to be normal as Karen is ready to get back in front of the camera for the first time since the initial attack.  Although she has a plan of her own when she transforms into a werewolf on live T.V. to make people believe they are real.  This all falls on deaf ears as the public thinks it’s a hoax or some kind of publicity stunt.  This movie is also jam-packed with in-jokes and ironic props.  Wolf Chili anyone?  All through this film launched a franchise of about 8 sequels the original is the only that should be ever be watched.


REVIEW: An American Werewolf in London”