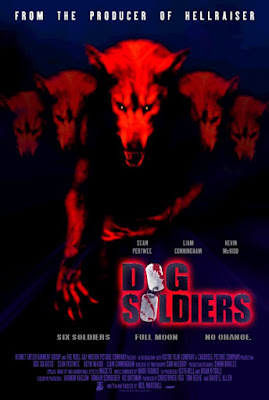 British director Neil Marshall’s debut feature was the 2002 werewolf film “Dog Soldiers” which is now regarded one of the great werewolf movies since the 80s classics “The Howling” and “An American Werewolf in London”.  What’s more is that the film was very low budget and didn’t have a U.S theatrical release, although it did hit the festival circuit.

Taking place in the highlands of Scotland an army platoon is going through training exercises when they realize that they are ones being hunted and not by other soldiers, but by a pack werewolves   We spend some time getting to know the soldiers.  The main guy is Pvt. Cooper (Kevin McKidd) who when approached by a special forces commander and ordered to shoot a dog he refuses.  This scene is also echoed at the end of the film.  The army platoon reaches their camp and they tell stories around the campfire when a mutilated animal crashes the party.  The morning after they find that the special forces team was completely wiped out with only one survivor the commander.  On the run from the wolves, they are picked up by a woman in a Jeep and brought to a farmhouse that is still miles and miles from civilization.  With no phones or radio, the house is soon under siege from the pack and they must fight for their lives and barricade themselves inside.  The fear and paranoia that is created are real and consistent for the remainder of the film.  We also get P.O.V. shots of the werewolves when the film switches from color to high contrast black and white. 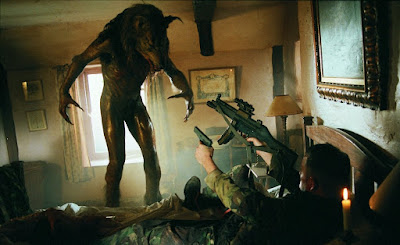 Megan, the woman who rescued them, starts to come off as a person who seems to know a lot more than she is telling everyone but still helps the team in their attempts to get help and also cares for the injured.  The third act is jam-packed with epic explosions, brutal combat, and a major double-cross.

The filmmakers fully embraced using practical effects in creating everything from the blood, guts, and gore to the werewolves themselves.  All of the locations are real and not done on a soundstage, which is essential in creating the feel and atmosphere of the film.  It is ridiculous how good this film looks and feels for the reported 2 million dollar budget.  This film will definitely satisfy those hardcore horror fans and is worthy of a buy at add to your disc collection.