"Hellbound: Hellraiser II" A sequel worthy of the Original 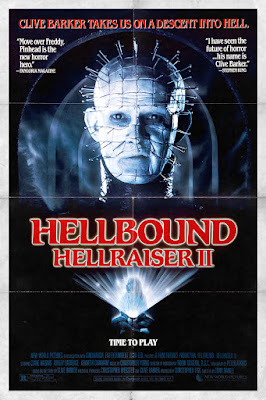 Read my review of the original “Hellraiser”

Released about a year after the original, Kristy is back as well as Pinhead and the Cenobites, which could also be the name of an awesome 80s metal band.  Nevertheless, like most women who survive a horror movie, Kristy is now confined to a mental hospital.  She is being treated by Dr. Channard and his young assistant Kyle.  As a hobby, Dr. Channard has been obsessed with death and searching for a doorway to hell.  After hearing Kristy’s story he thinks she is key to him finding it.

We get a number of flashbacks to the original, Kristy’s father Larry is now stuck in hell while her evil stepmother Julia is looking to be reborn and take revenge on Kristy after being killed off.  A lot hinges on the bloody mattress that she died on and the infamous puzzle box used to summon the sadomasochistic Cenobites.  Dr. Channard steals this mattress and bare with me, feeds it one of his patients.  This starts the resurrection process as we saw in the first film with Frank.  This time Julia comes back to life as a skinless, bloody mess looking for more victims to make her whole again.

While in the mental hospital Kristy makes friends with a quiet blonde girl named Tiffany who is about her age who has a talent for solving puzzles.  She could definitely come in handy when it comes to the puzzle box.  Kyle tries to help the girls but Julia gets rid of him pretty quick.  Tiffany is then able to open the puzzle box and the doorway to hell.  The girls not only need to fight off the evil Dr. Channard and Julia, but Kristy is hoping to also find her father.  Not to mention Pinhead and the cenobites who just love to dole out equal amounts of pain and pleasure to everyone.

Similar to the first film the practical special effects are amazing, but we do get another dose of cheesy optical and lighting effects which in this case can be forgiven.  I would have liked to have seen more of Pinhead and Cenobites as most of the story revolves around Dr. Channard and Julia.  In that area, I can help but feel a little cheated but overall it’s a decent sequel worthy of the “Hellraiser” name.