"Sinister 2" Another Unasked for Horror Sequel 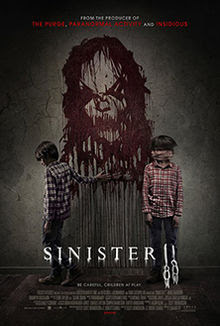 For the sequel, we have a new family, and this time a female protagonist in the form of a single mother named Courtney, played by Shannyn Sossamon.  Her and her twin boys, Dylan and Zach, are on the run from her abusive ex-husband and have found a place to lay low for a while.   The only returning character from the first film is Deputy So and So (James Ransone), who is now credited as Ex-Deputy So and So.  They keep up the running joke of never giving us his actual name.  He’s been on the road trying to stop the string of murders caused by the Pagan Deity Buguul.

“Sinister 2” seems to fall into the horror sequel trap of rehashing what worked in the first film.  The filmmakers resort to investigating strange noises and more creepy 8 mm films that were created by the supernatural kids under Bughuul control.  The whole supernatural dead kids angle is a little strange as only Zach and Dylan can see them.  They choose Dylan and force him to watch the grainy and choppy 8 mm films showing families getting murdered.  Courtney and Ex-Deputy So and So start to develop a sort of relationship when her ex-husband Clint comes roaring with his truck trying to gain custody of the kids.  So and So stands up to him and cop he brought with him and they eventually leave.  It seems like this story really has nothing to do or anything important to say.  While it tries to explain the origins of Bughuul is just not at all scary or all that interesting for that matter.

The ending gets a bit of a twist as Zach is now the one who has been brainwashed into killing the family and how he gets them all tied up on crucifixes like scarecrows I do not know.  Anyway, things fizzle out and we are left with more nonsense.  By the way who develops the 8 mm film? No to many labs out there and for snuff films? Just a few holes in this swiss cheese of a film.