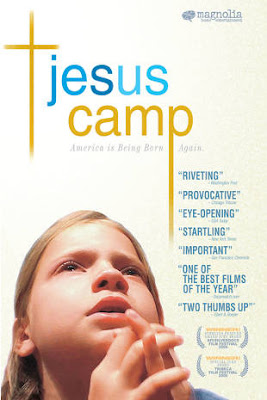 It’s been true since the dawn of time if you want to stir up intense debate and controversy just bring up religion or politics.  The 2006 Oscar nominated documentary “Jesus Camp” is full of both.  Directors Heidi Ewing and Rachel Grady focus their attention on the far right Evangelical Christians of middle America.  No matter what your personal beliefs are this film stirs up passionate responses on both sides.

We meet Becky Fisher a Pentecostal children’s preacher who holds these camps that indoctrinate children into a way of thinking.  They are told they are soldiers in a war to reclaim America for Christ.  Becky and the other adults in the greater scheme of things are using children as pawns to actively recruit others.  This whole practice sounds similar to how Nazi Germany used the Hitler Youth to push their agenda.  It’s a sickening practice that desperate and fearful extremists use to serve their own twisted ego’s.  Kids of course just want the love and attention of their parents and will do anything to get it so they just go along with it not really knowing what they are doing or what it all means.

The families involved in these camps look to be lower middle class families and this is punctuated by a young boy that the filmmakers choose to follow.  Levi is a 12 year old boy and a stereotypical trailer park kid with baggy clothes and a long rat tail running down his back.  He has bought into all of these teachings and preaches himself.  While most of the kids interviewed seem either extremely nervous or extensively coached, Levi has confidence and belief in what he says. 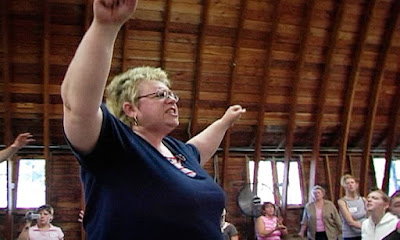 The filmmakers also make it abundantly clear the beliefs of the Evangelicals.  The theory of evolution is heresy and global warming is a political myth.  That Harry Potter is the anti-christ meant to lure kids to Satan (seriously, I’m not joking here).  It is mentioned that 75% of homeschooled children are evangelical, which points to a deep mistrust in society at large.  The filmmakers then follow Levi and some other kids as they visit Colorado Springs and the church of famed minister Ted Haggard.  Hagged also happened to be the President of the National Association of Evangelicals.  The camera follows him on stage as he makes a number of off-color remarks about gays.  But wouldn’t you know a little after this film was released Haggard found himself embroiled in a scandal with his own gay lover/drug dealer?  The Hypocrisy just doesn’t get any better than this.  Religion is just a business like any other with usually the poorest of people giving money to the rich for “salvation”.

In conclusion, the way a person chooses to live their life is totally up to them, but when it comes to extremists and using children to fight your battles is cause for concern no matter what you believe.  The question of whether these Jesus Camps actually do harm to these kids is up for debate like everything else.  Is it child abuse?  Where Becky Fisher’s methods a little too intense?  Religion is one of those topics that raise existential questions like Mankind’s attempt to rationalize its own existence and will continue until we as a people finally destroy ourselves or as Evangelicals believe the return of Jesus Christ. I won’t be holding my breath.