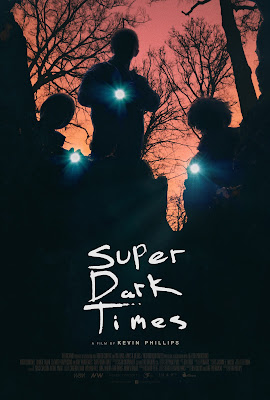 “Super Dark Times” delivers what it promises.  The film is a dark and honest look time at the lives of a few teenagers living in suburban America and an event that will change all of their lives forever.  Although this promising film does suffer from a third act breakdown all of the stuff beforehand is well executed.

The story is grounded in a typical suburban American reality, Zach and Josh are best of friends who spend their days at school and riding bikes around their small rural town.  They hang out with a few other kids Charlie and Daryl.  Daryl is a character that everyone can probably remember knowing growing up.  He is the foul-mouthed fat kid, who tries way too hard to be liked.  With not much to do the teens wander around on their bikes usually ending up at someone's house.  The characters and dialogue feel extremely naturalistic and true to life which sets this film apart.  Stereotypes are held to a bare minimum and the characters feel lived in.  While at Josh’s house, they go into his older brother's room, who is currently in the Marines, and find some weed and a samurai sword.  Josh tells them to leave the weed, but they go outside and horse around with the sword.  What could go wrong right? 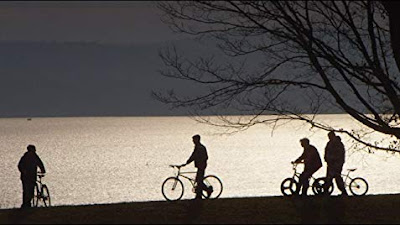 Daryl’s constant harassment of the others and the fact that he actually stole the weed pisses off Josh and they get into it a little bit.  But when Daryl sucker punches Josh, who is currently holding the sword, an unfortunate accident occurs.  Daryl is stabbed deeply in the throat and everybody freaks out.  This scene is hard to watch and its graphic realism is something that cuts to the core of anyone who sees it.  All three teens panic and cover up the body, they get rid of the sword and make a pact not to tell anyone.  This obviously creates a heavy sense of paranoia, guilt, and anxiety that takes this film to its ultimately unsatisfying ending.  Also at this time, Charlie’s girl crush at school starts to show interest in him.  Charlie is the heart of the film and the character the story primarily follows.  His journey is our journey.  His friendship with Josh quickly spirals into paranoia and fear of each other.  Although it's hard to say what a person would do in this situation you assume one if not both of the kids will crack under the pressure.  What Josh does seems to betray the strong sense of realism that the film has built up.  I’m not saying it couldn’t happen, but it just felt wrong.  This is a film about morality and doing the right thing and when you’re a teenager this can be very tricky.

“Super Dark Times” draws comparisons between 2001s “Bully” and 2004s “Mean Creek” although to me “Super Dark Times” feels more authentic while “Bully” like its title is more mean spirited.  Both films involve a sort of misguided revenge, while “Super Dark Times” revolves around an accident.  While made for under a million dollars “Super Dark Times” looks and feels like movies ten times its budget, as the characters really shine.  This is definitely a film to see despite its wayward ending.