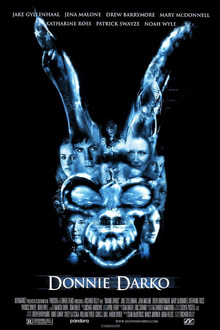 “Donnie Darko” is writer/director Richard Kelly’s debut film and is a modern-day cult phenomenon.  This mysterious puzzle of a film has an otherworldly graphic novel feel to it.  It’s a mind-bending trip into the surreal as seen through the eyes of high school student Donnie Darko played by Jake Gyllenhaal.

The film was unfortunately released during a very troubling time in America, about a month after the events of September 11, 2001.  With its dark themes and a disturbing plan crash at its heart, the film never took off (so to speak).  Cast off as a disaster and a flop the film found its audience when it came to video.  Now it’s considered one of the great cult classic films of the new generation.  Some films just strike the right chord and have this magical quality to them that keeps you entranced even after several viewings.  While books and essays have been written on this film, I will keep this review relatively short and not go into detail as to what every single scene supposedly symbolizes.  Simply put “Donnie Darko” is a teenage love story involving time travel (and a six-foot bunny named Frank).

Donnie is a quiet young man who has “emotional problems” he sees a therapist and even though we see him act up at school there is this sensitivity to him.  The question of whether he is on a path to becoming a dangerous man is still up in the air.  He seems likable and very true to life.  The mystery begins with the film's first scenes.  Donnie wakes up on a mountainside road next to his bike, seemingly unsure of how he got there.  As he rides home he sees that a jet engine has fallen from the sky and has destroyed his bedroom, although no planes have been reported damaged.  Donnie has an older sister, Elizabeth (played by real-life sister Maggie Gyllenhaal) who came home from a party just as the engine crashed into the house.  She’s alright but this scene is revisited near the end of the film. 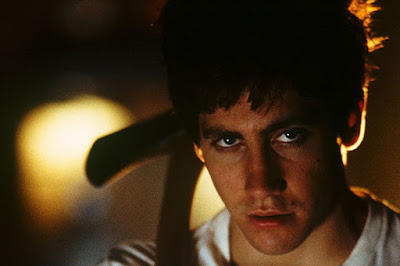 Donnie is woken up in the middle of the night by visions of a man in a bunny suit, we find out that his name is Frank.  Frank tells him that the world is going to end at a certain time in about a month.  Frank seems to be controlling him and has him commit a series of crimes.  Donnie floods the school by taking an ax to the water main.  The next day he meets Gretchen, played by Jena Malone and they develop this great relationship over the course of the film until things come to a head at the end.  There are so many great characters in this film and all of the performances are spot on.  From Patrick Swayze’s cheesy but true to life self help guru Jim Cunningham to Drew Barrymore’s small role as English teacher.  Barrymore was a huge supporter of the film and a producer that helped it get made.  Each and every character has their own place and function in the world of Donnie Darko.  It seems that every question that is answered just leads to more questions.  This mythology of time travel is developed and a book called “The Philosophy of Time Travel” helps guide Donnie.  We eventually find out more about Frank and what is happening to Donnie but there always seems to be this missing piece of the puzzle that remains a mystery.

A few years after its release on DVD, a director’s cut version was released with an extra 20 minutes or so added.  The commentary tracks do provide some answers but ultimately the film still holds up.  Richard Kelly also mentions that he pays great attention to the music he uses in his films and this could be part of the allure of the film.  When the song “Mad World” is playing over the climax of the film it just feels like the perfect song at the perfect time.  I love this film but for Kelly, it seems to be a double edge sword.  Since its release in 2001, he has directed two films, the bloated and incomprehensible “Southland Tales” and the decently mediocre adaptation of a Richard Matheson short story “The Box”.  That is it.  He is still a fairly young guy so maybe he’ll make a comeback of some sort, but we’ll always have “Donnie Darko”.