"The Eyes of My Mother" is a Must See! 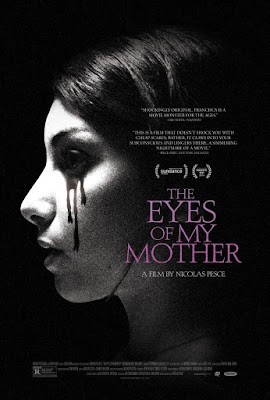 The art-house horror film has really flourished in the last few years with several filmmakers making really great films that hope to breathe new life into the often tired and overworked horror genre.  “The Eyes of My Mother” is the debut film from Nicholas Pesce and is a searing look into one woman's grief and loneliness.  The film is presented in black and white not as a cheap gimmick, but as the best way to tell this quiet, stark and stripped down story of its characters.

Set in a country farmhouse in about the 1950s or 60s a young girl named Francisca is fascinated by a butchered cows head, her mother an eye surgeon indulges in her daughter's curiosity.  Later while playing outside a drifter comes by the house and starts up a conversation with little Francisca.  The man looks to be in his twenties and is dressed like a bible salesman, but as they say, he don't look right.  Francisca’s mother comes out right away, the man then asks to use the bathroom and she reluctantly agrees.  The man is outright creepy and as one might think he is a psychotic killer, who drags the mother into the bathroom at gunpoint.  When Francisca’s father comes home, he finds the man in the bathroom with his dead wife.  Although Francisca is still alive she is deeply traumatized.  Instead of calling the police, they hand out their own form of justice and keep the man, who they call Charlie, chained up in the barn.  Flash forward about 10 years and Charlie has become this blinded feral beast and Francisca’s pet and only friend.  Her father is a very quiet and reserved man and when he finally dies it is the last straw in Francisca’s desperate life. 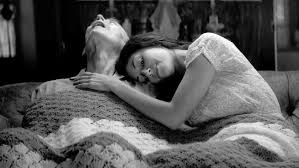 In some ways, this movie is a female version of Alfred Hitchcock’s “Psycho”.  Unable to deal with her father’s death she keeps his body and bathes it and sleeps with it.  She does make an effort to reach out to others as she goes to a bar one night and brings a woman back to her house but in short, time creeps the hell out of her.  As the woman tries to leave Francisca smacks him over the head.  We then see her putting little wrapped packages into the refrigerator.  This film can be subtle in its depiction of its nastiness, but also very overt when it wants to be.  Francisca is a very complex character with a tremendous internal struggle.  Her fear of loneliness and abandonment has been eating away at her for years with no way to express herself.  In another attempt at intimacy, she unchains Charlie, bathes him, and has sex with him.  She wakes up and finds him gone, she finds him staggering along in the fields outside the house.  She catches up with him and kills him.

Now is where the story gets even more disturbing.  She needs a new pet, so she hitches a ride from a young mother with a baby.  When they get to the farmhouse she asks to hold the baby and takes off with it.  The mother runs after her and into the house, where Francisca sets a trap and knocks her out.  She then blinds her and chains her up in the barn.  We flash forward again and the baby, Antonio, is now about five.  He is curious about what is in the barn and despite Francisca’s warning about going in there, he must investigate.  Although he is frightened, he shows love and compassion for this dirty long-haired creature who is his real mother.  One night he leaves the barn door open and she escapes.  This is the downfall of Francisca and the end of her painful and tortured life that started at the hands of a mad man.  Although this is a very short film, about 75 minutes, it doesn’t waste a second in telling its sad and disturbing tale.