The Best Horror Film in the last 10 Years! "Hereditary" 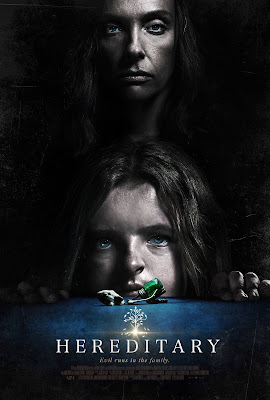 *Spoiler Warning*  Key plot points and events will be mentioned

“Hereditary” is one of the most intensely frightening and all-consuming stories of terror to come out in the past decade.  It was at the top of my list of best films for 2018 and it's a damn shame that Toni Collette did not get a best actress academy award nomination.  Although she is nominated for another award that actually still matters, The Independent Spirit Award for Best Actress.  This is also the feature film debut for writer/director by Ari Aster.  So excited for this guy's future and for the films yet to come.

“Hereditary” opens up with an obituary for Ellen Taper Leigh, which immediately sets an ominous tone.  We then venture through an art studio with dollhouses and into a room that seamlessly morphs into a real room.  We have here your average American family Mom, Dad, teenaged son, and younger daughter.  They are going to the funeral of their grandmother from their mother's side.  Annie, played by Toni Collette, is an artist who constructs lifelike miniature dioramas of things that have happened in her life, very similar to real-life artist Laurie Simmons.  Her husband is some sort of doctor and the least used character of the film.  The kids Peter and Charlie are seemingly normal although Charlie is a bit strange and something is definitely going on with her.  Peter looks to be a regular dude who hangs out and smokes pot with his friends, he also has a strained relationship with his mother.  Annie was also estranged from her mother as well and mentions their troubled relationship in her eulogy.  Annie reluctantly shows up at a grief counseling group were she mentions her family's history of mental illness and her brother's suicide.  This is only the beginning of Annie’s grief. 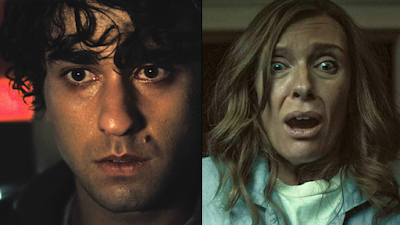 Peter wants to go to a party but in order to use the car he must take Charlie with him and he agrees.  Charlie keeps to herself and doesn’t seem to ever fit in anywhere.  She dresses in an oversized red hoody and likes sweets.  It is also mentioned earlier that she is allergic to peanuts, this comes back to haunt as the chocolate cake she eats has nuts in it.  Her throat starts to close up and panic ensues,  she finds Peter and they race off the hospital.  In a panic, Charlie sticks her head out the windows as Peter swerves to avoid a dead animal in the road.  Charlie is decapitated by a telephone pole.  This film means business and the WTF meter goes off the charts for most of the film.  In a state of catatonic shock, Peter just drives home and goes to bed.  The next morning Annie finds her daughter's headless body in her car and totally loses her shit, which is completely earned.  There are seemingly no cheap or unearned scares or emotions, everything comes along organically and makes it that more frightening.  The film keeps reaching new levels of grief and emotional intensity.

While in the parking lot of another group counseling meeting, she is flagged down by a woman named Joan who wants to help Annie cope.  Although not immediately Joan becomes this strange and sinister character and we find out that their meeting was anything but coincidental.  We see that Annie’s mother had an interest in the occult when she goes through her boxed up things.  It can be shocking and frightening to find out things about a family member or loved one who you thought you knew but has this hidden secret life.  We keep seeing this particular design or logo everywhere, from necklaces to graffiti and all over her mother's things.  Its meaning becomes clear in the end. 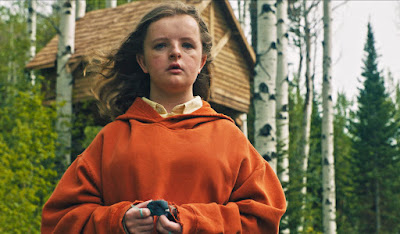 Joan introduced a supernatural phenomenon to Anne and proves that she can connect with Charlie just like she connected with her own deceased loved one.  It works but then Annie also seems to be on the brink of full mental collapse.  She shows this to her increasingly skeptical family and they just think she has lost it and needs help.  But is she really on to something?  This film is all about the horrors of family dynamics.  Relationships between people who you are bound to by blood whether you like it or not.  This is a very extreme scenario that eventually ventures off into the supernatural, but it strangely all feels completely natural and plausible.


This film requires multiple viewings to fully process everything, seemingly random shots and stills have a much larger meaning within the whole context of the film.  The film as a whole has this intensely heavy atmosphere throughout.  The score and clever use of sound is not something you usually comment on but here it was done masterfully.  I’ve seen this movie a number of times and still love every minute of it.  It still holds that strong emotional pull to it as well.  I don’t buy man blu-rays anymore but this one is going into the collection for sure.