"Piercing" Gets Right to the Point 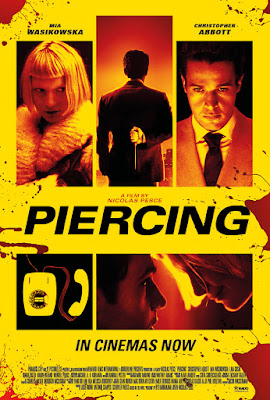 This short little film, barely running 80 minutes, is the second film from director Nicolas Pesce whose debut film “The Eyes of My Mother” was a dark and disturbing art house horror film that won rave reviews.  “Piercing” is based on a book by Ryu Murakami, who also wrote “Audition” which was made into the celebrated cult classic film of the same name.  Both novels and films lie in a sort of taboo world of sex and violence.  Pesce also adapted the novel for the big screen and although I have not personally read the novel, his film has this sort of retro stylization aesthetic that reminds me of a young Tarantino.  Although it seems like most young filmmakers go through a phase like this, Pesce’s use of this style creates a unique world that these characters live in.

As we pan through a vast forest of high rise apartment buildings of what looks to be Tokyo or some other megacity we are introduced to Reed, played by Christopher Abbott, a young husband and father who we notice is a little unbalanced as he holds on ice pick above his infant son, only to be startled by his wife, who is none the wiser.  Reed is going off on a “business” trip in which he plans on killing a prostitute with the aforementioned ice pick.  He is quite delusional in that his baby speaks a line in a demonic tone, “You know what you have to do”.  It’s hard to decipher the time period that the story takes place in.  It looks like to be an ultra-modern future but with old technology.  There are no cell phones or computers and the use of touch-tone phones and phone booths are widely used. 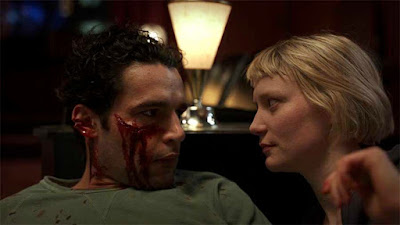 Reed checks into his room and goes through the motions of how he is going to kill and dismember his victim.  He even tests out the bottle of Chloroform that he brought.   He is very cautious about touching things which could be to eliminate fingerprints or as it turns out he is a bit of a germaphobe.  He gets a call from the escort service that his girl will be there within in the hour.   We then meet Jackie, played by Mia Wasikowska, who lives alone in another modern looking apartment, she gets a call from her pimp to packs up her things to meet with Reed.  As we come to find out Jackie and Reed are not all that different and his carefully thought out plan goes to pieces almost from the start.  Jackie looks to be the one in control right from the start and you start to wonder exactly who is playing who.  These are tortured characters who look fine on the outside, but start peeling away the layers are you find something dark and deeply disturbed.  This is the start of an intense S&M relationship that sees Reed drugged and beaten (by a can opener) and Jackie abusing herself all in the service of some greater need to feel.  In one of the films final scenes Jackie pierces her nipple “as a way to remember this”.  The last scene is of a ball gaged Reed finally giving into Jackie and a sort of communal relationship and understanding is formed.