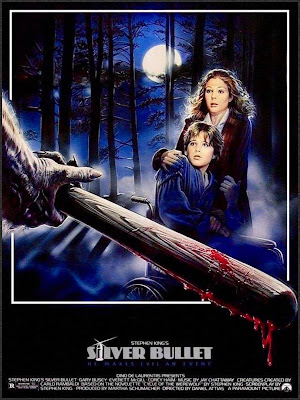 Continuing on our tour of Stephen King films from the 1980s.  “Silver Bullet” was released in 1985 and is your classic werewolf story.  Like most of the films in the King Universe, this story takes place in a small New England town and features kids battling supernatural evil.  Stephen King himself adapted the novel for the screen while Dan Attias directed the film.

Although the main character of the film is Marty (played by 80s teen star Corey Haim), a teenage boy in a wheelchair, the story is presented in voiceover from his older sister Jane years later.  Deep down this is really a story about the relationship of a brother and sister.  Marty’s wheelchair is called “The Silver Bullet” as it looks to be a combination of a wheelchair and a go-cart.  Marty also has this crazy goofball of an Uncle named “Red” played by who else Gary Busey.  When the townspeople start to die off, especially after a kid is killed, an angry vigilante mob is formed.  The people are being hunted by a werewolf, which is obviously a man in a suit but the make-up and effects are decent for the time period. There are a couple of transformation sequences that are well done and fun to watch. 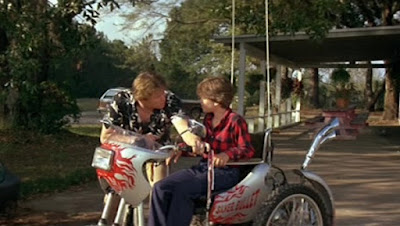 Red builds Marty a new even more badass Silver Bullet chair that goes like 50 mph and also gives him a bag of fireworks, does Red trying to kill Marty or what’s the deal here?  Marty breaks curfew and goes out by himself at night with a werewolf on the loose to shoot off his fireworks.  Of course, he is stalked and nearly attacked by the wolf but he is able to shoot a rocket into his eye.  Now he and Jane just need to find the person in town with an eye patch and it’s the person you would least expect, Reverend Lowe.  Nobody including Red initially believes in werewolves, but after a crazy car vs wheelchair chase and some convincing evidence, Red gets a silver bullet made of the kids' necklaces.  The suspense and terror obviously comes from the fact that Marty is in a wheelchair and his seeming inability to fight back, but he is a very smart and resourceful kid.  The situation also brings him closer to his sister as they have to work together to survive.  To wrap this story up Red is able to get the parents out of the house and during the next full moon, they get ready for the final showdown with Reverend Lowe.  The whole movie kind of plays out like an essay on “What I did on summer vacation”.  “Silver Bullet” is not one of my favorite King adaptations but it does have its charms.