"Cujo" is a Classic Horror Masterpiece! 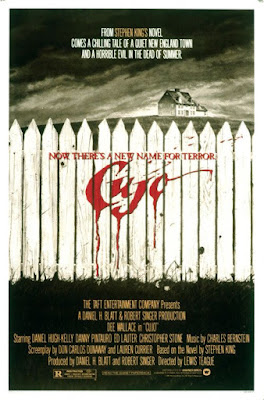 Stephen King is one of the world's great storytellers with over 350 million copies of his books in print, not to mention about 75 movies based on his books and short stories.  Some of the earlier movies that came out in the 80s are now being remade and updated for the modern era.  Most notably “It” from 2017 and “Pet Cemetery” which will come out in 2019.

“Cujo” is one of the greats and an icon of horror, similar to that of “Jaws”.  It’s the story of a big lumbering St. Bernard who is bitten by a rabid bat and turns in a slobbering, bloodthirsty beast.  Dee Wallace plays Donna, a wife, and mother, who must save herself and young son Tad from Cujo with only their tiny Ford Pinto to protect them.  She gives a miraculous performance full of emotion and determination that gives her character some real depth and dimension.  Although she is far from the perfect wife as she has been having an affair with a close family friend, Steve, played by her real-life husband Christopher Stone.  Her onscreen husband Vic is an advertising executive who drives a hot little red sports car, while she gets the trashy, broken down Pinto.  He does, however, seem to be a relatively good guy and a loving father to Tad.  Tad, their five-year-old son, is also well played by Danny Pintauro. 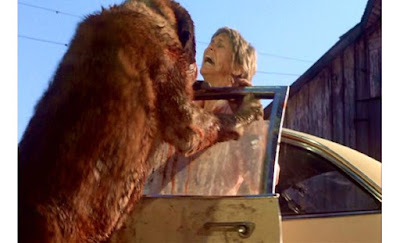 “Cujo” spends a good amount of time building its characters and creating a compelling drama that makes the latter half of the film even more terrifying.  When Donna’s infidelity is revealed to her husband, he takes off on a business trip leaving her and Tad to bring the Pinto up to the mechanic shop.  They barely make it to the dusty and remote shop when the car finally dies.  The Camber family owns the joint is nowhere to be found, although a side story about the family explain where they are.  Cujo is the only one present and he is not looking very good as the rabies are taking full effect.  Director Lewis Teague mentioned that they used 11 different St. Bernards along with a mechanical head and a man in a dog suit to fully realize the character.  Cujo has already torn apart a Camber family friend when Donna and Tad come rolling in.  They are introduced to Cujo in a very well earned jump scare as he ferociously attacks the car.   The two of them are now prisoners in the claustrophobic confines of the Pinto.  They wait and hope for someone to come by and save them but as night falls so does their hope of rescue.  In today's world, a person would just pop out their cell phone and boom problem solved.  The invention and proliferation of smartphones have almost single-handedly killed off the horror movie.  It becomes more and more difficult to explain them away, but hopefully, this will lead to better stories and newer ways to scare people.

A few days into their showdown with Cujo, the hot summer sun beating down on them, Donna decides to make a run for the house and the phone.  This is a total failure as Cujo is always waiting, always ready to attack.  Donna is bitten and scratched, Cujo even manages to get inside the car.  Tad is balled up and crying in the back, it’s a pretty intense scene.  She eventually kicks him out and they are back to where they were before, only bitten and defeated.  Her husband Vic has been trying to reach her for days but has gotten no answer.  A bit worried he contacts the police who go to their house to find that their bedroom has been ransacked by Steve.  An officer then goes up to the mechanic shop to check things out only to meet his end at the jaws of Cujo.  All this in full view of Donna and Tad.  Tad then starts having some serious medical issues, Donna can't wait any longer and makes a second attempt for the house and this time with the help of a baseball bat is successful.  Tad is unconscious and she vigorously tries to revive him and brings him back to life.  This is a major departure from the book where it actually dies.  As with most horror films, Cujo does give us one last scare until he is finally put down.  “Cujo” is one of the more well known and terrifying of King’s adaptations and I’m sure a remake is in its future somewhere down the line.