"Phantasm II" The Glorious Return of the Tall Man! 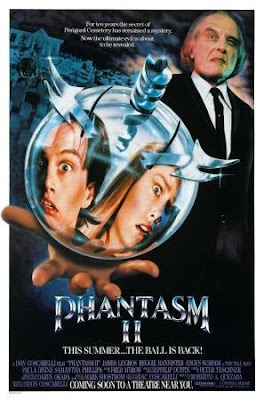 The sequel to the original cult favorite film “Phantasm” didn’t come around until 1988 which was about 10 years later.  Writer/Director Don Coscarelli is back along with the two main protagonists Mike and Reggie as they continue their battle with the Tall Man.  Like most sequels, it plays on what worked well in the first film as well as trying to add to the whole mythology.  We get a lot more of the Tall Man and of course those crazy flying spheres of death.  We also get a couple of girls to join the group, because obviously, the guys need love interests.

Starting right where the last film left off we get a kind of reminder of what happened previously. Then we flash forward a number of years to see Mike (now played by “Minnesota Native” James Le Gros) a 19-year-old just getting out of a Mental Hospital.  He is taken in by Reggie and upon pulling up his house, the place explodes with family members inside.  The shit then starts to get real.  There is an action movie style gearing up for war sequence at a supply store they break into and then they hit the road in search of the Tall Man and his army of undead dwarfs.  The Tall Man is scouring small towns on the pacific northwest and digging up cemeteries to build his other dimensional armies. 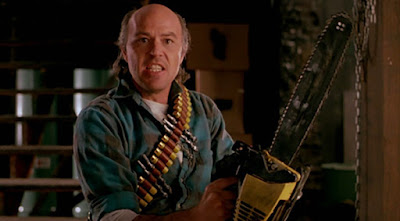 This film does have its fair share of humor to go along with the horror and is mostly carried by Reggie who hauls around a ridiculous tool belt of weapons.  He also totes a seldom-used four-barreled sawed-off shotgun (wicked awesome).  Mike and Reggie are a great horror duo somewhat similar to the more recent “Tucker and Dale vs Evil”.  In their travels, the guys pick up a hitchhiker named Alchemy, a free-spirited love interest for Reggie.  When they track down the Tall Man to another small town Mike finally meets up with Liz, a girl he has a sort of telepathic connection too.  Liz is quite the typical innocent, suburban white girl.  She has a run in with the Tall Man at her Grandmothers funeral and is now on the run from him.  We now have our fab four groups of heroes and in the funniest scene of the film, Reggie and Alchemy have this weirdly awkward sex scene.  There is also a scene in the crematorium where a guy is bagging up some ashes labeled “Sam Raimi” a jab at the writer/director of the “Evil Dead” Films.

As promised we get more flying silver spheres chasing and mutilating people, but they do also have another purpose as the guys find out.  To round out the general awesomeness of this movie is a  chainsaw fight and another surprise ending.  Just like all of the 80s horror super villain’s you can’t really kill evil and the Tall Man will surely be back for more sequels.  In the time between reviewing the first film in 2009 and this review another sequel was made in 2016 called “Phantasm: Ravager” still starring the original Reggie (Reggie Bannister) and Angus Scrimm as the Tall Man.  Sadly Angus passed away shortly after completing the film as he was 89 years old.  As of right now, all 5 Phantasm films are available to rent from Amazon’s streaming service.