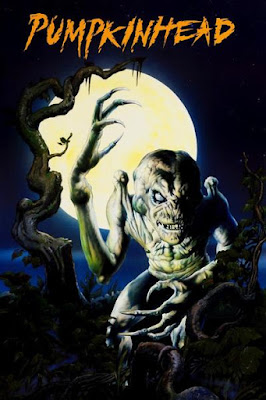 The 1980s were a golden age for horror fans and in 1988 special effects wizard Stan Winston got behind the camera to direct a moderately successful film called “Pumpkinhead”.  This was a movie that was popular on late-night Cinemax and HBO also on VHS.

We open on a small farmhouse in 1957 with a mother, father, and their small son.  There is a furious banging at the door, a teenager running for his life is looking for help, but the people inside don’t move and refuse to help him.  The boy outside is taken by some kind of monster with the little boy inside seeing the outline of a tall an ominous being.  Flash forward to the present (1988) and the little boy is all grown up.  His name is Ed Harley, played by Lance Henriksen, he has a little boy of his own now named Billy.  He has a sweet and loving relationship with him that is built up for what looks to be an upcoming tragedy.  This appears in the form of a couple carloads of teenagers from the city.  The teens are not overtly mean or evil except for maybe one of the guys who is kind of a douche.  Being that it's an 80s movie the teens are hauling a trailer with a couple of totally rad dirt bikes that are taken out for extremely reckless driving.  Ed owns an old dusty road ride grocery store and leaves Billy alone with the teens to run a quick errand.  What could possibly happen right? Well, when Billy’s dog runs out the door after the bikes, Billy is close behind after him only to get a face full of rampaging dirt bike.  He lies unconscious as the teens all rush over to him, after some arguing some of them leave, while a few go for help while one of them stays with him until Ed gets back. 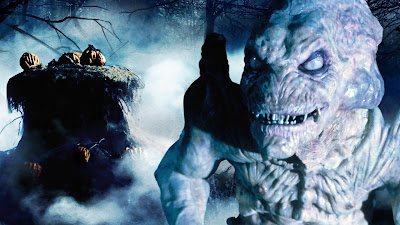 Riddled with unbearable grief Ed searches out a backwoods woman named Haggis, a witch with supernatural powers.  She performs a ceremony, with Ed’s blood, to summon the demon Pumpkinhead who resides in a pumpkin patch/graveyard.  Pumpkinhead is resurrected and sent on a mission of revenge against the teens responsible for Billy’s death.  Although as the teens start to die one by one, Ed also feels it and starts to regret his actions.  He then goes out to stop Pumpkinhead before they are all dead.

“Pumpkinhead” is a good but not great film from a decade that has so much more to offer.  Its got a very nostalgic feel to it, for me anyway.   The story is quite simplistic and deals with some well-worn themes.  It plays out like a twisted fairy tale  The effects and performance by Henriksen do stand out as well as Pumpkinhead himself.  Shout Factory gave the movie a Collector’s Edition Blu-ray release a few years back with a number of special features that are worth checking out.  The movie is also available to watch for free with Amazon Prime.