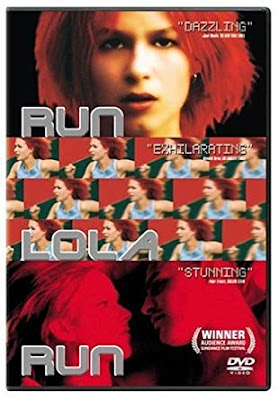 German Filmmaker Tom Tykwer set the world on fire with his 1998 hyper-kinetic film “Run Lola Run” starring Franka Potente and her blazing red hair.  A master class in editing, pacing, and the use of music to pump up the action.  No matter what language you speak, Run Lola Run should be enjoyed by all.

When Lola’s boyfriend Manni leaves a bag of money on the train meant to pay off some pretty serious dudes, she now must come up with 100,000 Deutschmarks in 20 minutes in order to save his life.  The film is structured in a way that we see her goes through three different attempts each with different outcomes.  With a driving techno score, the pressure and urgency are bumped up to the max.  Color also plays a key role in the film with red obviously being most prominent, not only in her hair but with various other objects she comes in contact with.  Red is emergency, danger, and love. 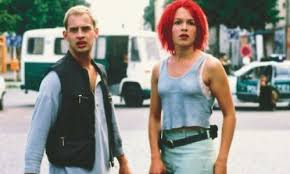 Lola follows the same path and runs into the same people in each of her attempts to save Manni.  Although everything is just a little different each time.  Like a different plane of reality.  So where is Lola going to get the money?  Her father is a bank manager, but she is a little estranged from him as he left her mother and is in a relationship with another woman.  This plays out like a cheesy soap opera, but in a satirical way, just another distraction in Lola's quest.  Manni contemplates robbing a supermarket and when Lola is held up and doesn’t meet him at the agreed time he goes for it only to be shot down in front of her.  After each attempt, we have a scene with Lola and Manni in bed bathed in red light talking about their relationship.

Lola seems to learn from her mistakes in her previous attempts but fails on the second time as well.  Will the third time be the charm?  This time she's trying her luck at a casino and for a second time she lets out a glass-shattering scream that seems to stop time.  Will she crack the code this time and make all the right moves to save Manni once and for all?  “Run Lola Run” is truly an intoxicating experience that will keep you going for all of its brief 81 minute runtime.