"The Witch" Casts a Spell of Terror! 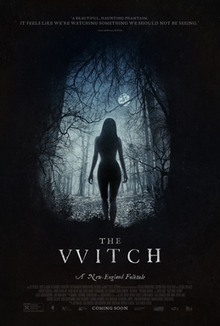 “The Witch” is a painstakingly authentic look at a dark time in the New World called America.  This is an immigrant family’s tale of terror from 1630s New England.  Set before the infamous Salem Witch Trails a family of six has been banished from the safety of the plantation and forced to make it on their own.

William, Katherine and their four children Thomasin, Caleb, Twins Mercy, and Jonas and baby Thomas settle on a small farm on the edge of the forest.  Day to day life is a struggle and when forces outside your control seem to be conspiring against you a desperate search for answers drives people to insane lengths. The dialogue in the film is of the period and taken from the actual journals of the people who lived in that time.  The atmosphere created by director Robert Eggers is amazing and together with the haunting score its adds to the many layers that make up the film.

This story belongs to Thomasin, a beautiful blonde teenage girl on the verge of womanhood.  In there very religious and very repressed society, the most dangerous and fearful thing imaginable is a young woman’s burgeoning sexuality and its effect on everybody else.  While playing an innocent game of peek-a-boo with baby Samuel, the baby suddenly disappears.  Although we the audience see what happens to Samuel, the family does not.  Numerous other strange happenings start occurring.  The crops wither and die, Caleb has impure thoughts of his sister.  The Mother exudes anger and jealousy over Thomasin’s youth and beauty.  The animals also take on a sinister appeal, none more than Black Phillip the goat.  This overarching feeling of doom and dread all seem to point to Thomasin. 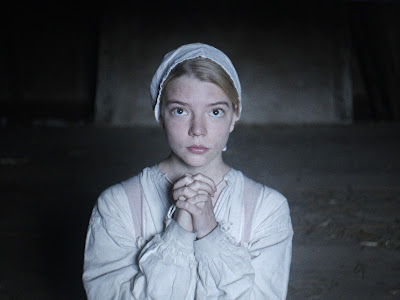 When Caleb and Thomasin slip out to look for their baby brother, the horse gets spooked and the dog runs away.  Caleb goes after them but gets lost only to find the witch house.  Thomasin is found by her father, but Caleb doesn’t return until a day later and in some sort of trance, he’s been bewitched.  The family is physically and psychologically being torn apart leaving Katherine homesick for England.  Everyone gets swept up into hysteria leading to accusations of witchcraft.  Everyone turns on each other.  Katherine’s hallucinations are absolutely frightening as well as Caleb’s delirium right before he dies.  Everyone has their spirit shattered in horrific ways all ending up with Thomasin being that last one standing.  Eventually walking into the woods to join a coven of Witches dancing naked around a fire.  This “New England Folktale” is extremely well made and acted and seethes authenticity and fear.