"The Autopsy of Jane Doe" is the Sleeper Horror Hit of 2017! 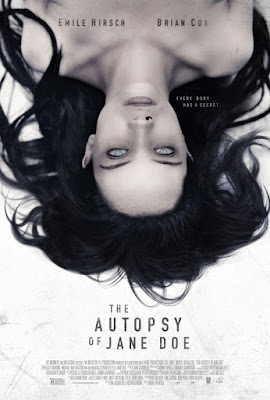 Truly great Horror films are very hard to find these days.  Since they are relatively cheap to produce and proven money makers there is a lot out there.  Most of which are pure crap.  “The Autopsy of Jane Doe” is a rare treat, it’s engaging, suspenseful, and well-acted.  The absolute sleeper hit of 2017!

Veteran actor Brian Cox plays Tommy who with his son Austin, played by Emile Hirsh, run a generations-old Mortuary and Crematorium business.  Both actors give grounded and realistic performances even when things a little crazy.  The perceived ages of the two characters seems a little off, but it’s a minor complaint in an otherwise believable duo.

The film opens with crime scene investigation and a mysterious young woman half-buried in the cellar.  We then cut to our guys Tommy and Austin as we watch them perform an autopsy on a man who is burnt to a crisp.  The gory nasty bits are extremely well done.  They go about their business of cutting up the body weighing the organs and such.  Although they seem to have a good working relationship there is some tension between them.  When the work is done, we meet Austin’s girlfriend Emma.   Emma is excited and curious to see some dead bodies, while initially hesitant, the lockers are opened.  As a throwback to an earlier time, one of the corpses has a bell tied to their toe.  This little item is used to great effect later on.   Austin and Emma’s plans for a night out are put on hold when the Sheriff rolls in the body of the Mystery Woman.  Not wanting to leave his dad with all the work Austin goes back to help solve the mystery of the Jane Doe. 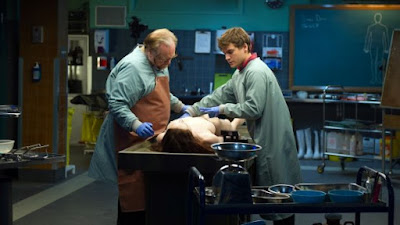 On the outside, the woman’s body looks immaculate except for some dirt (or peat) under the nails.  Her insides, however, tell a much different story.  She looks to have been beaten and tortured.  Her lungs are black suggesting she died in a fire.  Although you get the hint of what she is and what’s really going on, the characters take their time and eventually come to the realization.  The film succeeds in its execution of the material and the portrayal of its characters.  Tommy and Austin are people we care for, they are our close friends.  They are not your typical horror stereotype douche bags whose only reason for being is to get sliced and diced.

When they’ve finally had enough weird shit happening to them they decide to leave.  With a raging thunderstorm going on outside, a large fallen tree has blocked their escape.  Needless to say, things start getting a little crazy and they guys must double their efforts in finding out who this Jane Doe really is.  The ending to all this mayhem is a little unsettling but does fit well within the whole mythology of the story.  It’s a fun late night movie that is a step above most other scary movies.