Take the Trip with "Bonnie and Clyde" 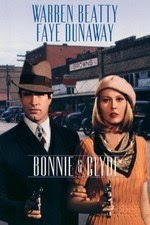 “Bonnie and Clyde” was released in 1967 and based on the true story of Bonnie Parker and Clyde Barrow whose depression era crime spree is one of the most infamous in American History.  Starring Warren Beatty and Faye Dunaway this film is a true classic.  The film was released in a time when the country was going through some tough times both socially and politically.  The film's depiction of on-screen violence was quite the landmark in that it set the tone for films to come.  The filmmakers don’t just show the violence, but the consequences of it as well.  It depicts Bonnie and Clyde as heroes even as they rob banks and murder police officers.  They were also decades ahead of their time as they were some of the first media superstars.  They were proud of what they were doing and told people “We rob banks”.  They took pictures of themselves holding guns and looking tough, especially Bonnie with a cigar in her mouth and a gun on her hip.  Bonnie was a lonely and bored small-town waitress with no hopes for the future, while Clyde was an ex-con with a talent for stealing cars.  They were the perfect match and fell in love almost immediately.  The film is so many things it’s a love story, a road movie, a crime drama and even funny at times.

The themes of personal freedom, rebelling against authority, and strong women fit in perfectly with the ideals of the 1960s.  Bonnie and Clyde end up forming the Barrow Gang which included his brother Buck and his wife Blanche and C. W.  Moss a young gas station attendant who is good at driving and fixing cars.  During a bank robbery, while the gang gathers up all the money, Clyde asks an old man in overalls if “That’s his money or the banks?” “Its mine,” he says and Clyde lets him keep it.  Clyde is not out to harm and steal from the good blue collar working man, but the establishment itself.  I think he sees himself as a sort of vigilante against the oppressive government. 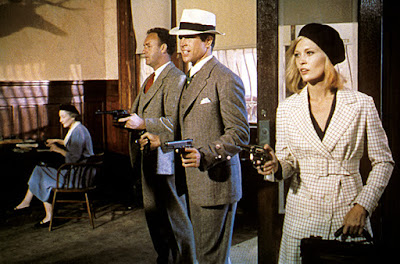 While the film is light on music and quiet in some dramatic moments, there are several scenes with a loud banjo playing.  It just doesn’t seem to fit.  It’s probably put in for a light-hearted and comedic tone, but I found it quite distracting.  The editing was also a little off-putting at times.  When Bonnie and Clyde are hiding out and in bed together Clyde proclaims again that he is no lover boy and gets up frustrated, the cuts are rather disorienting.  I get what the director wants to communicate, but I just think it looks bad and sloppy.  There were also a few scenes that looked way too melodramatic and overacted.  The actress Estelle Parson who plays Blanche actually won an Academy Award for her role which I thought was way over the top and actually annoying at times.

As I mentioned previously the violence is quite brutal and realistic for the time.  There are a number of shootouts with the cops and in the last one, Buck is shot in the face but staggers around in a bloody mess for the next few scenes before finally dying.  Both Bonnie and Clyde get shot in the arm and Blanche gets glass in her eyes.  But the ultimate scene is when Bonnie and Clyde finally reach the end of their crime spree and are taken out in a hail of gunfire. I really liked this film and can see why people call it a classic and although its 50 years old it still holds up as an entertaining and engaging film.