Take a Ride through the "Badlands" with Terrence Malick 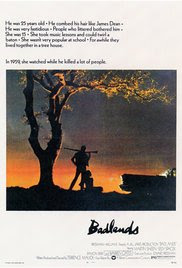 “Badlands” was the debut film from American auteur Terrance Malick and brings us the story of lovers on the run.  Released in 1973 and starring Martin Sheen and Sissy Spacek, the film has its characters desperate for something else.  Loosely Based on the true story of Charles Starkweather, the teenage spree killer who tore a path through Nebraska and Wyoming in the late 1950s.  Along for the ride was his 14-year-old girlfriend Caril Ann Fugate.

Holly is a lonely 15-year-old girl in a small Texas town who lives with her dad.  He voice echoes throughout the film in voice-over that is more than just narration but is like a diary of her thoughts and feeling about life.  While twirling her baton one afternoon in the front yard a young and muscular garbage collector starts up a conversation, this is Kit.  Kit is a charismatic bad boy from the other side of the tracks with a strong resemblance to James Dean.  Kit is about 10 years older than Holly and their fast-moving relationship has been kept from her father.  But when he finds out he takes it out on her dog by shooting it in the yard.  Kit pleads to him that he is a good man and that he means only the best, but this doesn’t work.  When things come to a head Kit gets violent and when trying to take Holly away he shoots him dead.  Holly seems rather indifferent to this.  It could be that she is in a state of shock cause she does slap Kit, but sees this as a chance for freedom.  They bury his body and set the house ablaze before hitting the dusty open road. They hideout in the woods making treehouses and eating what they can find or steal.  When a group of bounty hunters comes across their camp Kit is ready for them and kills all 3.  Holly is quick to defend him although does she really know what kind of person he really is?  They run to a friend of Kit’s and stay with him for a while until Kit’s paranoia gets the better of him and shoots him in the back when he thinks he is about to rat on them.  Kit and Holly hit the road once again but for Holly life on the run is still a life of solitude and loneliness.  She doesn’t take part in the killings but she is loyal to Kit.  They become a part of the landscape just like all of the other animals we see in the barren plains.  They make their own roads with no destination in mind.  Although they are both looking to be free, they end up creating their own prisons.  The law finally catches up with them in Montana.  He leaves Holly so she doesn’t get hurt and burns a path through the plains.  He seems to have outrun the police but sabotages his own car, and allows himself to be caught.  He is polite and congenial to all of the law enforcement people.  He is so charismatic and likable that some of the cops even ask for his autograph.

This is one of the great films of the 70s and introduced the world to Terrance Malick.  His films are deeply meditative and in tune with the natural world and people's involvement with it.  He later went on to direct the equally brilliant “Days of Heaven” in 1978.  Only then to take an astonishing 20-year break from filmmaking and reappearing with “The Thin Red Line” in 1998.  He has now been making films at a regular rate.  An artist and philosopher Malick is truly one of a kind.