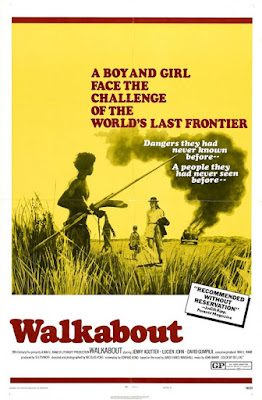 A walkabout is an Australian aboriginal ritual right of passage a young boy makes to become a man.  Nicholas Roeg’s 1971 film “Walkabout” is a study of humanity and the clashes of old and new.  Juxtaposing the fast and furious city life to that of the slowed-down outback and quite the shock for a couple of kids who like the aboriginal boy are thrust into the harsh landscape to fend for themselves.

A teenage girl, played by Jenny Agutter, and her little brother, the director's son Luc, play unnamed characters who are going out on a picnic with their father.  Not to Hanging Rock mind you, but into the flat and desolate outback.  The father character, played by John Meillon, remains in the VW Bug rather distraught as he looks at his newspaper and listens to the radio.  The children investigate the landscape and the girl sets up the picnic area.  Then shockingly the reason for the picnic becomes clear, the father takes out a gun and fires on the kids, who duck for cover.   He then douses the car in gasoline and lights it up, then kneeling before it raises the gun to his head and fires.  In shock, the kids gather their few possessions and head into the landscape.  Roeg keeps the cameras eye on various different animals that populate the outback usually opening a new scene with a different animal, the character has now entered an area where they are also one of the animals. The kids roam the dusty expanse in the full sun with no clear destination.  Nearing exhaustion they finally find an oasis, a small watering hole with trees and little fruits.  They bathe, drink, and rest until the next morning when everything has dried up.  With their survival in doubt a figure appears on the horizon, its an aboriginal boy hunting lizards.  The boy is played by David Gulpilil who has since had a long career of playing aboriginal characters. “Walkabout” being his film debut he plays a character about the same age as the girl about 16 or so.  Although there is a language barrier, he helps them out with survival techniques and companionship.  He is your average teenage boy, he likes to goof around and has an amazing smile.  Undertones of sexuality begin to filter in as their journey continues, although still with no destination in sight.  There is a quick cut montage of the aboriginal boy hunting and the girl swimming naked.  Death, beauty, and survival are the themes that rule in the outback.

They end up finding the abandoned ruins of a farm and set up camp there for the foreseeable future.  One of the main overarching themes of the film is of the white man's desecration of the native people and their lands, similar to the United States.  The aboriginal boy disappears for a while and returns to perform what looks to be a mating ritual.  He is painted white and dances outside the household plants in each hand.  From the girl's point of view, this looks to be a frightening and menacing dance.  All through this he is silent and makes strange facial expressions.  She stays away from him in fear while he does this dance all throughout the night.  Things happen that I don’t want to give away in this review, but the girl is obviously left changed by her experiences in the outback.

“Walkabout” is a great film that has so many things to say.  It is the death of innocence, a comment on modern (1971) society, and mainly of the human condition.  It is made by a master filmmaker and deserves to be seen by all.

The Beautiful and Uplifting "Whale Rider" 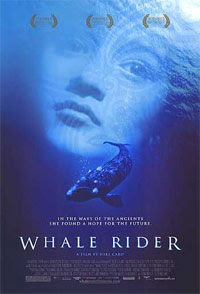 
The New Zealand based film “Whale Rider” was the indie phenomenon of the 2002 award season.  Directed by Niki Caro and starring 13-year-old Keisha Castle-Hughes, both of which receiving numerous awards and critical praise.  Castle-Hughes was at the time the youngest person to ever be nominated for Best Actress in a Leading Role at the Academy Awards.  The film is about girl power, about strength and determination in the face of male-dominated traditions.

Paikea, is a young Maori girl descended from a long line of tribal chiefs.  She would be in line to take over one day but she happens to be a girl.  Only firstborn sons are allowed to rule.  Her mother and twin brother died in childbirth and she is being raised by her Father and Grandfather named Koro.  Koro has always resented Paikea and blames her for killing his daughter and the firstborn son.  Although they love each other, they have a very strained relationship. Their society is deeply traditional and has no desire to change, but with Paikea’s will and determination, not to mention natural born talents, she will try to push Koro to institute long-needed changes. 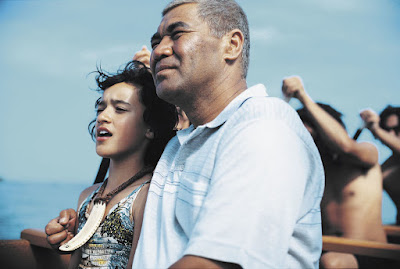 This relationship between Paikea and Koro is at the heart of the film.  Paikea is constantly testing Koro’s patience as she tries to train with the boys and at one point defeats one of them in a stick exercise.  Blasphemy! Koro feels that she is desecrating sacred rituals.  She then goes to live with another woman and shows off some amazing skills in the water.  While back home Koro slips into a deep depression, his conflicted feelings have thrown his whole life out of whack.  He can’t even find it in his heart to attend Paikea’s big play at school.  At this play she gives this absolutely heartbreaking speech, that really kicks the film into high gear.  Koro ends up taking a walk along the beach to get some air and encounters a beached whale.  He gets some help and the race is on to save it.  While Paikea arrives home just in time to become the person she was born to be.  With a calm confidence way beyond her years she instinctually climbs atop the giant mammal and directs it back to sea.  Just like the old stories and folklore foretold, Paikea is the one.  Koro has this major epiphany and accepts Paikea as the true heir and next tribal chief.  “Whale Rider” is a deeply emotional and entertaining film without being overly sappy and over the top.  It feels true to life and all the performances are absolutely incredible.