The Mystical "Picnic at Hanging Rock" 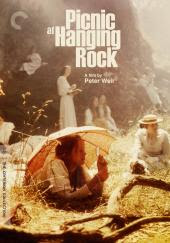 We are introduced to a small Girls College on Valentine’s Day 1900 where the girls are preparing for the “Picnic”.  The soft melancholic and slightly erotically charged scenes of the girls getting ready with there corsets and flowing hair.  Glances to one another through mirrors and an air of youth and beauty.  Sarah, an orphan, is not allowed to join the girls on this trip.  She must stay behind with the stern and strict Mrs. Appleyard whose name is on the building.  The girls board the carriage and make their way to the mysterious mountain.

Clothed in long white formal dresses in the midday sun, the girls are not alone as another well to do family is picnicking there as well.  Their teenage son, Tom, and a slightly older carriage driver look upon the girls.  The theme of repressed sexuality is a major theme within the film and can be felt in almost every scene.  The atmosphere of the film is very unique as it blends together so many emotional notes in an almost subconscious way.  Lounging at the mountainside and in the tall grasses, The carriage driver notices his watch has stopped, the same with the chaperones.  This little bit of ominous foreshadowing just adds to the mystery. 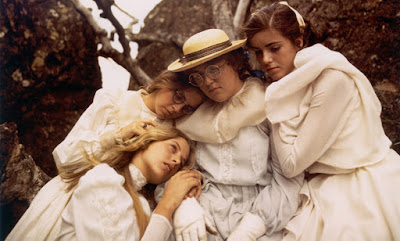 After lunch Four girls, Miranda (the Botticelli Angel), Irma, Marion, and Edith (the complainer) venture into the labyrinth of stone to explore the mountain.  They almost immediately seem to become entranced, except for Edith who continues to complain about everything.  They lounge around and end up napping, upon waking the three girls almost as if being led by a mystical force walk further up the mountain and vanish.  A hysterical Edith is found and brought back to camp.  What happens to the girls? This is the question that has been fueling this film since its premiere.  Search parties are sent out but its as if they just disappeared or never existed at all.  No Bodies, no evidence, nothing.

Tom, motivated by his brief encounters with Miranda, takes on his own search of the mountain and although he comes back bruised and battered he finds Irma!  She is found without her corset, shoes or stockings and after a doctor's examination found to be quite “intact”. When asked what happen she remembers nothing.  The loss of Miranda hits Sarah the hardest as her infatuation with her was quite deep.  She is also on the verge of being kicked out of school for non-payment or her tuition.  With the scandal of the lost girls, Mrs. Appleyard’s enrollment dwindles.  Bad things tend to happen in repressive societies as you can only keep actions and emotions down so long until they will eventually explode and everyone has their breaking point.  “Picnic” is a richly layered film in which each viewing can reveal something new.

A "Mustang" Cannot be Tamed! 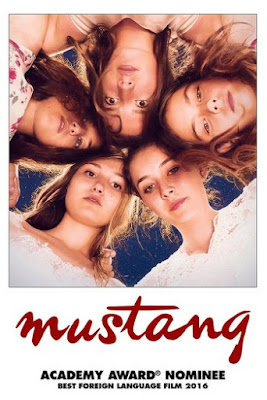 The 2015 film “Mustang” was nominated for an Academy Award in 2016 for Best Foreign film but unfortunately didn’t take home the prize.  Writer/Director Deniz Gamze Ergüven's film is the story of five fiercely independent sisters who must fight against aging cultural norms to find freedom and take control of their own lives and bodies.  Placed in rural Turkey with strict religious and moral standards, girls and women have very little freedom.  The whole society seems to be stuck in some sort of medieval time warp.

Lale, Nur, Selma, Ece, and Sonnay are your average fun loving and respectable girls who on the last day of school play around in the ocean with a group of boys.  This seemingly innocent horseplay between friends becomes scandalous and labeled as obscene behavior.  Chastity must be protected at all costs.  The girls are even taken to the local doctor to ensure they are still virgins.  Raised by their aunt and uncle the girls are put on house arrest but escape now and again forcing them to turn the house into a formidable prison that backfires at the film's conclusion.

The future is pretty bleak for the women in this society after a girl has her first period she is fit to be married off.  The girls are more of a traded commodity than an actual person.  The town’s older women get together to play matchmaker over tea and biscuits.  The merchandise (the girl) plays hostess and tries to make a good impression.  Family prestige, wealth, and subservience play key roles.  Then the men are brought in to broker the deal.  The girl's youthful innocence and tight bond slowly get torn apart.  Sonnay, the oldest, is married off first.  Her depressed, melancholic attitude during the whole ceremony is ignored as the man is celebrated.  The marriage customs are equally archaic and bizarre.  The bedding ceremony and bloody sheet inspection, to confirm she has in fact lost her virginity, are just unbelievably intrusive and gross. 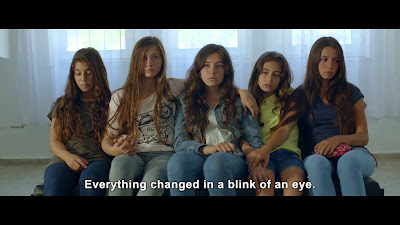 After the first two sisters get married off Lale starts to feels abandon and betrayed and decides that this will never happen to her.  She dreams of escaping with her remaining sisters to Istanbul to start lives of their own.  When its Ece’s (the middle sister) turn to be auctioned, she doesn’t want anything to do with it and after acting out at the dinner table and sent to her room and in a final act of defiance kills herself.  All of these people seem to have no sense of free will and are all slaves to traditional values.  The men do whatever they can to quell any uprisings to keep their oppressive power.   When it comes time for the next sister to be married off, the girls are in full revolt mode, and right before the ceremony, the girls lock themselves in the house.  By now the house has been turned into an impenetrable fortress, and the furious men are unable to get in.  Things get extremely intense and If the girls are caught they will be killed!  They are able to slip away and eventually get to Istanbul and hopefully a better life.  Although it's hard to imagine that this kind of stuff still exists in the world it is all too prevalent. 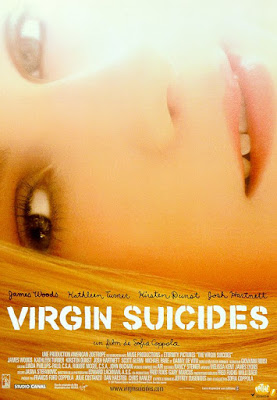 The directorial debut of Sofia Coppola came in 1999 in the form of an adaptation of Jeffrey Eugenides hypnotically enthralling book “The Virgin Suicides”.  The daughter of famed director Francis Ford Coppola, Sofia made a less than stellar acting debut in her father's Godfather: Part III in the early 90s.  Her immense talents in directing are definitely where she belongs and it all started with this film.

The Lisbon sisters, Cecilia, Lux, Bonnie, Mary, and Therese live in a modest suburban Detroit neighborhood.  Their mystical beauty casts a spell over the neighbor boys that last a lifetime.  The mystery and legend of the girls only deepen as they all end up taking their own lives.  Born too strict religious parents played by James Woods and Kathleen Turner, the girls live a sheltered life and their noose of freedom is always getting tighter and tighter.  The film is told through the memories of the neighbor boys who spend their days imagining what the girls must be like.

The youngest of the girls, Cecilia (Hanna Hall), gets things started by surviving a suicide attempt.  Her lost and melancholic face always seems to be somewhere else. Like the film itself, it lives in this dreamy sort of limbo between life and death.  After getting advice from counselors the Lisbon parents agree to throw a party so the girls can socialize with boys.  This ends as bad as a party possibly can as Cecilia finishes what she started by killing herself. 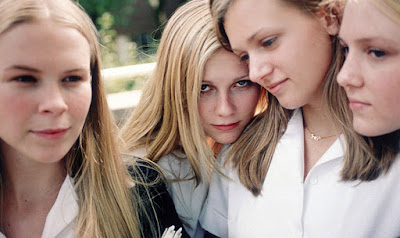 Lux (Kirsten Dunst), the second oldest at 14 is by far the most outgoing and adventurous of the girls.  She is pursued by the coolest guy in school Trip Fontaine (Josh Hartnett).  She plays hard to get but Trip is persistent and eventually wins her over with their relationship culminating at the homecoming dance.  Ignoring her curfew and other sisters she gives it all up for Trip as they spend the night on the football field.  Waking up alone, Lux returns home to a new level of restraint.  Her infuriated parents take the girls out of school and their bedroom becomes their prison. Lux devolves into the town slut as the boys watch her sneak out to be with a new guy just about every night.  The girls eventually reach out to the guys and they communicate their feelings over the phone by playing records back and forth.  The girls finally decide they want out and the guys agree to take them anywhere they want, but their way out is more drastic than anyone could have imagined.

As I mentioned before Coppola injects a dreamy, otherworldly quality to every aspect of the film.  Being set in the 1970s reinforces this, from the clothing and music and performance of the actors.  Although I would have liked to have known more about the other sisters, the five of them all seem to act like one.  The ultimate question of why the girls kill themselves remains a mystery, even as the guys vividly recall the events some 20 years later.  For Coppola “The Virgin Suicides” was only a precursor to her hit 2003 film “Lost in Translation” which brought her several awards and accolades.