"Joy Ride" is Quite the Trip! One of the forgotten gems of the early 2000s, “Joyride” is a thrilling and entertaining road film with a horror twist.  Starring the late Paul Walker, Steve Zahn and Leelee Sobieski the cast is first rate as well as the direction by John Dahl.  The script also got a rewrite from J.J. Abrams, who at the time was a relative unknown.  Although mired in re-shoots and other setbacks, the final film is surprisingly good.

Lewis (Paul Walker) is a college student from California who is going home for spring break and decides to cash in his plane ticket to buy a crappy car so he can pick up his girlfriend in Colorado.  He gets a call from his estranged older brother Fuller (Steve Zahn) who needs to be bailed out of jail.  This creates our nice little road trip scenario.  Fuller is the risk-taking loose canon compared to Lewis’s more reserved and responsible type.  While getting a tire fixed Fuller has a CB Radio put it, kind of random, but it works.  This sets up the whole premise of the film.  To pass the time on the open road the guys use the CB to pretend to be women, Fuller’s idea of course.  Lewis or Candy Cane as he calls himself plays along and they go fishing on the airwaves.  They start talking to a guy named Rusty Nail and start to reel him in.  They go as far as setting up a meeting a sleazy roadside motel and when Fuller runs into an angry businessman in the rental office decide he should be the one to meet up with Rusty.  The guys rent the room next door so they can hear how it all goes down.  Obviously, it doesn’t go well and the man is severely beaten.  They guys are shaken and have a bit of a guilty conscious, but they talk it over with police and are back on the road in no time. 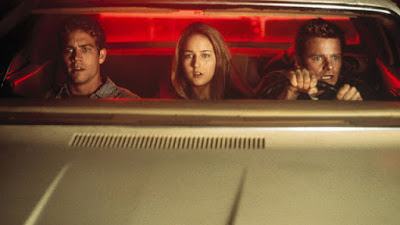 Still furious that he’d been played Rusty Nail tracks down guys and turns the tables on them.  What makes or breaks this film is Lewis and Fuller, they are real relatable people, who are more than your average horror stereotypes.  They play off each other really well and Zahn’s off the wall character is very well done in a role that could have been an awful parody.  You feel for the guy and you want them to survive.  At the halfway point of the film, we finally meet Venna (Sobieski), Lewis’s girlfriend.  She is smart, sophisticated, and nothing like your typical scream queen, although things do end up trending towards the damsel in distress syndrome in the third act.  Rusty Nail continues to torment our characters and abducts Venna’s roommate.  In the film's funniest scene Rusty forces Lewis and Fuller to go in into a restaurant buck naked and order burgers.  Rusty then manages to abduct Venna as well in a cornfield chase.  He then sets a trap for the guys at another roadside motel, just like what they did to him.  “Joyride” has its share of Hitchcockian moments and strives to be better than your run of the mill horror movie, even if it does tread on familiar themes.  And like most horror films leaves you with an ambiguous twist ending that leaves open the possibility for sequels.  Two straight to video sequels were made without any of the original characters, except for Rusty Nail, of course, I don’t plan on seeing these but they do exist.