"Welcome to the Dollhouse" The Best Indie Film of 1995! 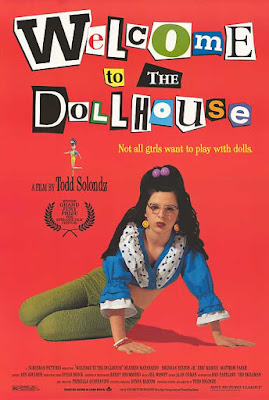 “Welcome to the Dollhouse” was the breakout indie film of 1995 and launched the career of filmmaker Todd Solondz.  The auteur director is known for his dark humor and satirical wit, he likes to torture his characters not to mention his audience with painfully awkward and embarrassing moments that also hit a nerve of truth.
Heather Matarazzo plays Dawn Wiener a spirited seven grader.  But let’s be honest she’s far from the prettiest girl in school and growing up is hard.  She is mercilessly bullied at school and is known as “Wiener dog”.  We follow Dawn in the school cafeteria desperately trying to find a place to sit, but that’s only the beginning of her daily adventures.  Even when trying to do good and helping others it always seems to backfire.  When trying to defend herself, she is the one that gets punished.  Home is not much better with her younger pretty ballerina sister and older book smart brother.  She is the family whipping girl.  It comes to mind that if there was ever an inspiration for the character of Meg on “Family Guy’ this is your girl. 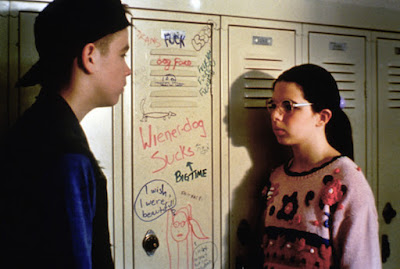 You’d think that Dawn would be damn near suicidal, but no, she takes it in stride and lives her life.  She has cobbled together a clubhouse in the yard called “The Special People’s Club” where she and a neighbor boy talk.  Unknown to her she is later told what the clubhouse really means.  When her brother starts a garage band with a couple of his friends they sound awful until they get high schooler Steve Rogers to be their lead singer.  Dawn is immediately smitten with him.  A common theme in a Solondz movie is that Love is awkward and bizarre and feelings can burst out in some pretty strange ways.  When Brandon, the meanest of Dawn’s bullies, threatens to rape her after school, she is terrified. The first attempt is thwarted by a school janitor and when Dawn shows up for the second attempt they just goof around.  He kisses her, but it's rather sweet and not in the least menacing or violent.  Brandon really is more than just a one-dimensional bully stereotype.  His character is fleshed out and made whole when seeing why he acts the way she does. Their relationship is odd but that's life.

While taking place in the early 1990s before the internet, smartphones, and social media the ideas explored are timeless.  A dark satirical thread is woven through this thick tapestry of American suburban life.  “Welcome to the Dollhouse”.