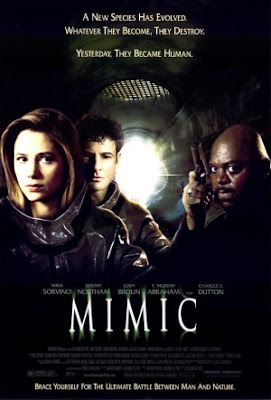 Guillermo Del Toro’s second film was the modestly budgeted studio film “Mimic” and according to Del Toro was a complete disaster from start to finish.  His stylistic touches can be found sporadically but things just don’t come together in the end.  Miramax, the studio who bankrolled the film, has since allowed Del Toro to release a new Director’s Cut edition on Blu-ray.  This version also contains an insightful commentary about the filming and production by Del Toro.

The giant cockroach movie it has been called.  When roaches start infecting the children of Manhattan with a deadly disease entomologist Dr. Susan Tyler, played by Mira Sorvino, helps bioengineer a new breed of roaches called the Judas breed.  It kills off the disease-carrying bugs and the epidemic ends.  But 3 years later, these roaches have rapidly evolved into a more dangerous problem than they ever thought possible.

An autistic young boy who lives with his grandfather spends hours looking out his bedroom window, the man across the street is a bit strange and he calls him Mr. Funny Shoes.  He uses two spoons to mimic the sounds he hears and the sounds coming from across the street sound like cockroaches.  Kids in peril and battling evil is a theme of Del Toro's work, but here it gets second billing to Dr. Tyler and her husband Dr. Peter Mann (Jeremy Northam).  Along with Josh (a young Josh Brolin) and transit cop Leonard (Charles S. Dutton), the group hunts the NYC sewers for a human-like cockroach species that is looking to replace the human race. 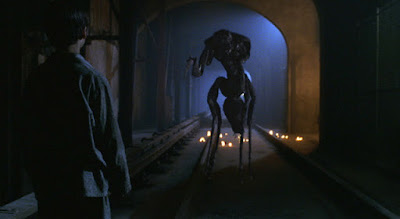 With numerous script re-writes and issues during production, it is surprising how good the film turned out.  There are some dead-end storylines likes Dr. Tyler’s pregnancy and a sappy Hollywood style ending.  The bug effects and actions were decent as well as pacing.  The characters were nothing special, about a tic up from your stock horror movie fodder.  There is a lot here that could be something and the director’s cut tries to focus things a little better by adding some scenes and cutting others out, but as Del Toro says in the commentary, “This is as good as it will get”.  Surprisingly there were two straight to DVD sequels for which Del Toro had no involvement.  After his experiences with the film, Del Toro’s next project goes back to his roots with the Spanish language ghost story “The Devil’s Backbone”.