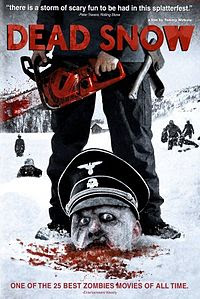 The 2009 German horror film “Dead Snow” takes a crazy B movie premise, Nazi Zombies, and makes it into a blood-soaked worldwide hit.  Made on a shoestring budget of only $800,000 the film was made exclusively for the horror connoisseur.  Although the film is in German with English subtitles which may put off a lot of people, what’s on the screen is what matters most.  Director Tommy Wirkola has gone on to directed “Hansel and Gretel: Witch Hunters” which came out in 2013 and had a budget of over $50 Million.

“Dead Snow” is plotted out like so many other horror films a group of young people, this time medical students, go on a ski vacation to a cabin in the mountains.  You have your various stereotypical characters, The fat party animal, the hot guy, the hot girl, etc.  All very one dimensional and uninteresting.  They find out early on that the mountains interfere with the cell service, so they can’t call for help when things start getting interesting.  There is even a scene where a mysterious old man comes into there cabin to tell them the history of the area and to beware of the evil presence.  After leaving the guy is brutally killed later on in his tent by some mysterious monsters.  Being a German film there are a number of American pop culture references and homages to other horror films.

While searching under the floorboards they come across on an old wooden box filled with World War II era gold coins, suspected to be hidden Nazi gold.  Stop right here!  Put the Nazi gold down and back away from the cabin.  They don’t take that advice and battalions of Nazi Zombies emerge from the ground.  While some of the students smoke pot an have sex, in a stanky outhouse, for instance, the other drink themselves stupid and party it up unknown to them what lurks outside.  When the invasion starts the blood and gore start flowing it’s an all-out battle for survival.  There doesn’t seem to be a hero survivor character to really get behind and cheer for but for the Zombies, it’s Col. Herzog the rarely seen leader of the pack.

“Dead Snow” seems to be heavily influenced by the films “Evil Dead” and “Dead Alive”.  The oftentimes comedic and slapstick style of violence and gore is sure to get a reaction out of the most hardened horror fan.  From chainsaws, sledgehammers, and snowmobiles, we zombie kills from every angle.  The film is very simple and straightforward and doesn’t aim for anything more than it is.  Nazi Zombies.


A well-received sequel was released in 2014 again directed by Tommy Wirkola, but this time with a bigger budget and starring Col. Herzog.