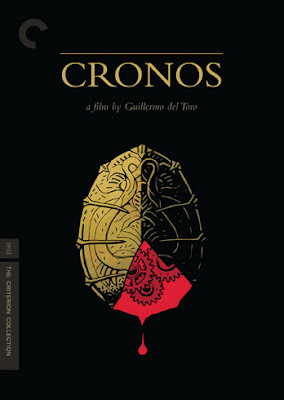 Del Toro’s themes are present in all of his films.  Insects, children, gothic fairy tales, and lighting.  “Cronos” introduces us to his world with a very small budgeted but finely crafted story.  Jesus Gris is an antique dealer and while investigating a new piece finds a small egg-shaped device that opens like a beetle and clamps down on his hand, drawing blood.  His blood awakens a dormant worm-like creature inside the device that begins a transformation of Jesus.  His granddaughter Aurora is always by his side and goes on this journey with him.  Although silent until the end Aurora is her grandfather's pride and joy.

A wealthy industrialist, De La Guardia, is a Howard Hughes like billionaire shut-in that has been searching for the Cronos device ever since he came across a sort of user manual for it.  His nephew, caretaker, and heir in waiting Angel (played by Ron Pearlman) helps him in his search.  Meanwhile, Jesus has been enjoying a youthful resurgence thanks to the device.  Although it does have a hold on him like a heroin addict and further bodily changes come quickly.  Soon his skin is starting to rot and is extra sensitive to the sun.  Aurora turns her toy box on to a makeshift coffin for him to sleep in.  His growing need for blood rears its ugly head in a public bathroom where he seems licking it off the floor.  Filled with themes of mythology and Catholicism the film feels more than what is on the surface.  Jesus and Aurora come face to face with De La Guardia in his factory/mansion in hopes of getting out alive and seriously in question.

According to Del Toro, horror stories are born out of childhood fairy tales. His subsequent films “The Devil’s Backbone” and “Pan’s Labyrinth” are prime examples of this.  A retrospective museum exhibition entitled “At home with Monsters” offers a deep look into both Del Toro himself and his films.  It is as though they are one and the same.  “Cronos” is available on Blu ray from the Criterion Collection with very insightful commentary from Del Toro.  It is highly recommended you buy the new boxed set from Criterion simply called  “Trilogia de Guillermo Del Toro”.