The Power of "American History X" 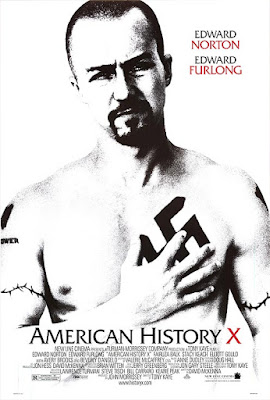 One of the great films of the ‘90s and according to imdb.com the #30 best rated film of all-time. Tony Kaye’s “American History X” starring Edward Norton and Edward Furlong is a deeply moving story of love and hate.  Norton’s portrayal of Derek Vinyard, a reformed white supremacist, earned him an Oscar Nomination as well as wide critical praise.

Hate breeds hate and feasts on vulnerable young minds.  With a little encouragement from the wrong group of people and a charismatic leader Derek is led down a dangerous path.  Living in Los Angeles Derek and his family seems to be living a normal suburban life until his firefighter father is killed while responding to a call in a dangerous neighborhood.  His father was a racist and influenced a lot a Derek and his younger brother Danny’s thoughts.  After his death, Derek found a sort of surrogate father in Cameron (played by Stacy Keach), a powerful white supremacist leader.  Derek takes to the teachings and rhetoric and is all in.  He now has a big swastika tattooed on his chest and a white power tat on his bicep.

The film opens in black and white with a major turning point moment in Derek’s life, a group of young black men are trying to steal his truck from his driveway.  When Danny tells him about it, Derek bursts out of the house locked and loaded.  He shoots two of the guys and curb stomps the other.  This scene and other parts of the event are recalled throughout the film.  Derek is sent to prison for three years.  The film is told in a non linear fashion going back and forth between Derek’s activities before prison, his time locked up, and when he gets out. 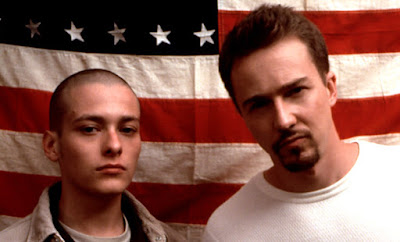 In the present day Danny is seen going down the same road as Derek, his school report entitled “My Mein Kampf” obviously drew the attention of the faculty and of principal Dr. Bob Sweeney (a black man).  Danny’s new assignment is to write a report on his brother entitled “American History X”.  The overall voice and perspective of the film is through Danny’s eyes as he writes his report.  The bond between him and his brother is very strong and when Derek emerges from prison a changed man, he does everything he can to change Danny’s thinking.  Now looking for like an accountant, with his button up shirts and grown out hair, his old friends look for him to return to his old self.  Derek’s mind has grown in prison, the realities and lies of the white power movement become more clear as he is eventually betrayed by his arrayan brothers, for befriending Lamont, a black man he works in the laundry with.  Lamont calls him out on all of his bullshit and gets through to Derek on a deeper level.


Where Derek tries to distance himself from his old life, he is met with some strong resistance.  He must now try to rescue his family from sickness, his mother has emphysema or something,   and poverty.  He does have a sister, Davina, who seems a little underused in the film and just kind of a prop.  When everything seems to be looking up and we think we're headed for a classic Hollywood ending, we have out hearts ripped out with an ending that really brings the house down.  It's tragic but feels right if all you do is spout hate don’t be surprised is it come back to bite you in the ass.  Hate has a memory and things can pop up when you least expect it.