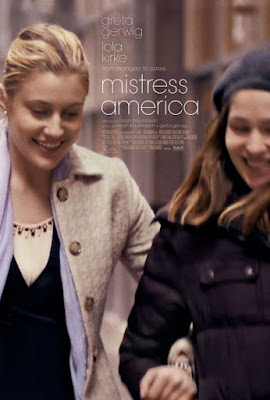 This is the second of two films by writer/director Noah Baumbach to be released in 2015.  He re-teams with his muse Greta Gerwig who also shares writing credits.  Like most of Baumbach's films "Mistress America" takes place in and involves a woman's battle for personal identity and direction in life.

Brooke is a thirty-something woman living in .  Her positive attitude and outgoing personality deceptively hide her directionless mess of a life.  She is ambitious but not very successful as her dreams often exceed her grasp.  When she finds out that her father is getting remarried she is excited that she will be gaining a younger step-sister.  , played by Lola Kirke, is an eighteen-year-old college freshman who wants to be a writer and has dreams of being chosen to join the prestigious Mobius Literary Society.  A group of pretentious douche bags where good writing seems to be of little importance.  is smart and reserved but underneath lies a very dogged personality.

Brooke seeks out and they instantly start to bond.  The dialogue is pretty amazing as the words spill out of Brooke as if her brain was on fire.  With her disjointed and often quirky stories, begins writing it all down and starts a story called "Mistress America".  Her youthful ambition is something that Brooke yearns for.  A chance to restart her adult life.  Although Brooke refuses to let her dream of becoming a dancer go and it's painful to watch it slip by as she desperately tries to hold on.  She has several odd jobs to pay the bills but it's just not cutting it as she couch surfs at many friends' apartments.  The film is actually separated with title cards of the different addresses she is currently living at. 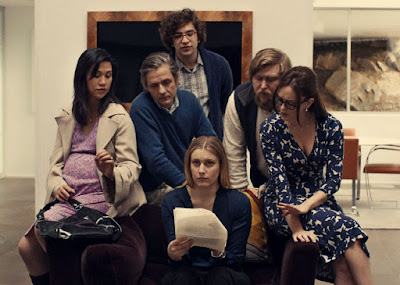 After the financing for Brooke's other dream of opening her own restaurant falls through she takes on a mission to meet an estranged friend, Mamie-Claire.  Brooke claims that Mamie-Claire stole some of her ideas when they were roommates in college and she made a ton of money off of them.  They drive to an extravagant mansion in where they run into a whole new batch of problems and situations.  The whole movie especially the scenes at Mamie Claire's feels like a play rather than a movie.  It feels a little staged and rehearsed but the dialogue is spot on and it is pretty funny.

's story is eventually published and upon reading it Brooke feels betrayed by her future stepsister who ends up just being another girl as the wedding was called off.  receives a lot of backlash from the story but is accepted into the literary society. So where does this leave the girls and their relationship?  finds out that Mobius is full of shit and decides to start her own club, while Brooke looks for a change in scenery and plans to move to L.A.  seeks out Brooke and they reconcile over and an impromptu Thanksgiving dinner.  "Mistress America" is an interesting slice of life that seemingly only Noah Baumbach could do, it is definitely his style and he does it quite well.  Although not his best film it fits in nicely with the others. Greta Gerwig is amazing and hopefully, this will continue.